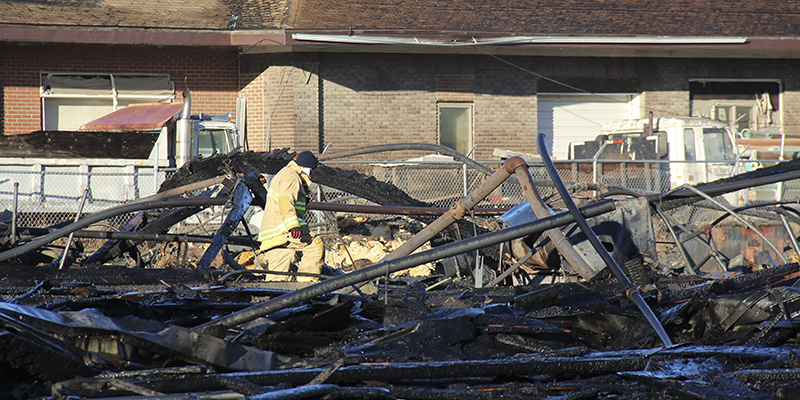 The cause of the large warehouse fire in Albert Lea near the West Main Street viaduct has been deemed undetermined, according to authorities.

The Albert Lea Fire Department on Tuesday stated human interaction is believed to be involved in starting the fire at 601 W. Main St. Thursday night because the building had no power, gas or utilities of any kind. However, the damage was significant enough that investigators could not determine if the human interaction was accidental or intentional.

The Albert Lea Fire Department investigated the case with the assistance of the Minnesota State Fire Marshal’s Office, the Bureau of Alcohol, Tobacco, Firearms and Explosives, and the Albert Lea Police Department.

The release stated the ATF called in a special cadaver dog to assist in searching the property to make sure that no one had been trapped inside at the time of the fire. After a six-hour search, nothing was found on site.

Police had frequently been called to the building for reports of homeless people seeking shelter there.

The blaze completely destroyed the warehouse and led to the evacuation of 13 homes nearby because of heavy smoke. Some of the homes sustained siding damage from the high heat.

The fire was initially reported by an Albert Lea police officer on patrol in the area who reported smoke coming from the building.

When firefighters arrived, they found heavy smoke, and the fire quickly grew to engulf the whole building. They remained at the fire for about 10 hours.