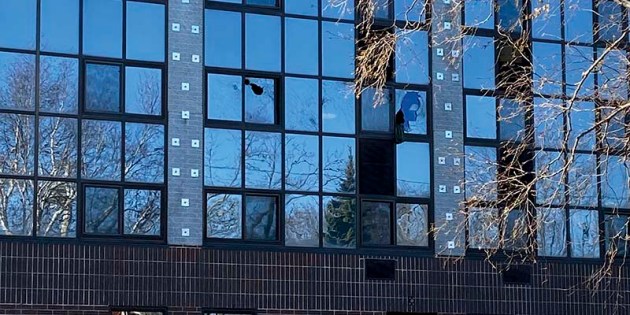 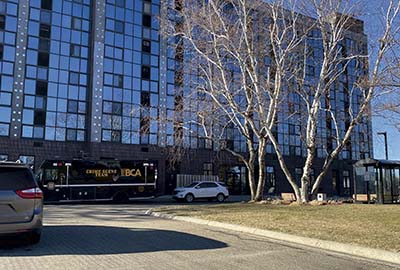 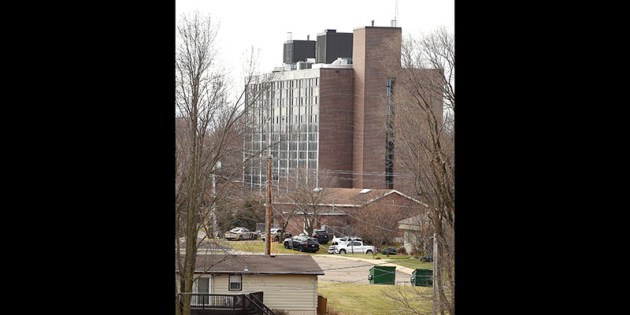 Law enforcement mass outside of Shady Oaks apartment complex as they look for the suspect in a shooting that took place early Sunday morning that injured three people. Eric Johnson/Albert Lea Tribune 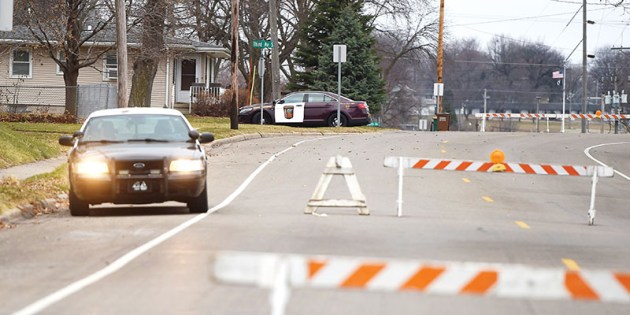 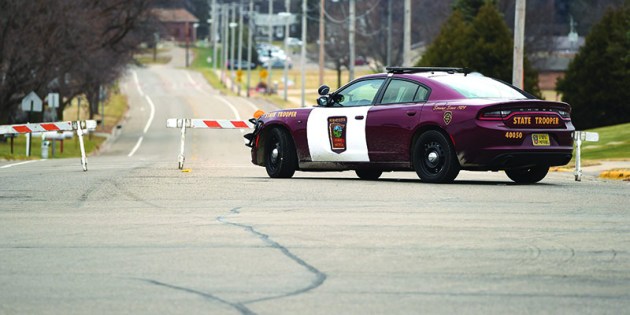 A Minnesota State Patrol trooper blocks off Front Street at US Highway 69 as law enforcement continued to search for a suspect in a shooting early Sunday morning. Eric Johnson/Albert Lea Tribune 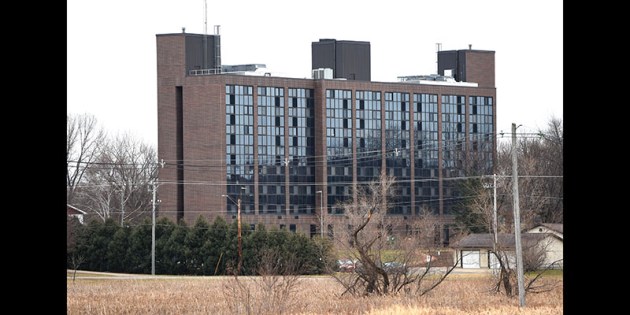 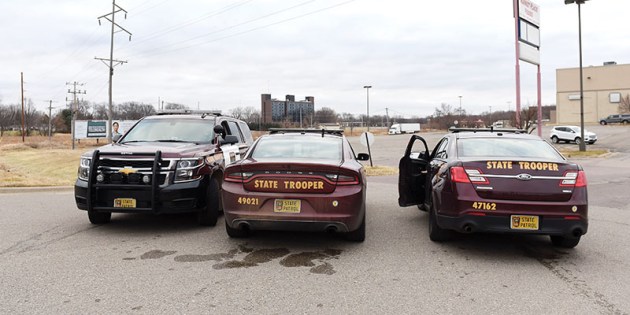 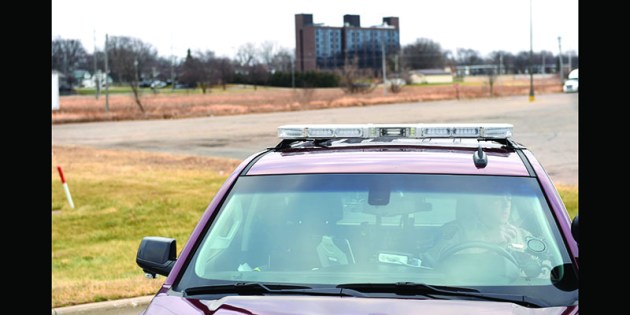 A Minnesota State Patrol trooper blocks off entrance to a parking lot across from Shady Oaks apartment complex, the scene of an early morning shooting that injured three. Eric Johnson/Albert Lea Tribune 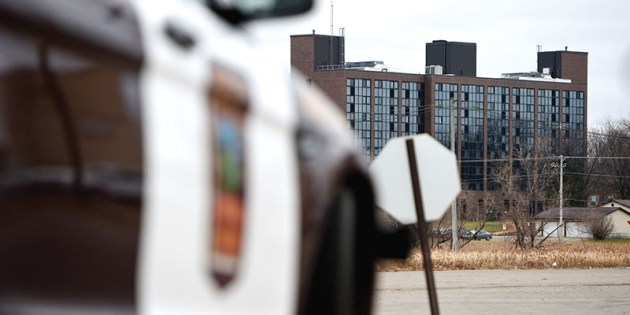 The Albert Lea man who allegedly shot three people Sunday morning during an eight-hour standoff at Shady Oaks apartments was arraigned Tuesday on three counts of attempted murder and three counts of second-degree assault with a dangerous weapon.

Freeborn County Attorney David Walker stated Weiland reportedly summoned law enforcement to the apartment complex that morning at 2:18 a.m. for a report of fireworks or gunshots in the area, and when the first officer arrived, Weiland began firing shots out the window from his apartment on the third floor, striking that officer in the chest with a rifle.

The officer, who was wearing a protective vest, suffered a serious injury to the chest that was about two-inches-by-two-inches in size and that was consistent with a wound caused by a high-velocity impact, according to court documents.

The county attorney said during the approximately eight hours that followed, Weiland took shots at whatever target presented itself as officers attempted to make contact, and there is no evidence that any of the other individuals who were shot were threatening to him.

One person, who heard noises, reportedly left the Shady Oaks building because he was concerned about his vehicle, court documents state. As he returned to the apartment building, he was shot in the arm, suffering a gunshot wound to his right bicep that displaced and fractured his humerus. He also suffered a large tearing injury to the right side of his chest.

That man was rescued by an officer and taken to the hospital.

A second person, who lives across the street from Shady Oaks, reportedly left for work at about 5:15 a.m., drove north on Fourth Avenue and was struck by a bullet through his car door. He suffered an injury to his leg that required emergency surgery, court documents stated.

Court documents state officers attempted to evacuate the building as Weiland continued firing at officers and residents out the window. Most of the residents were removed to safety.

According to Austin Police Chief David McKichan, the APD’s overnight shift was monitoring radio traffic from the ALPD when it heard about an active shooter event going on at about 3 a.m. on Sunday.

“We immediately responded via mutual aid by sending a SIRT (Special Incident Response Team) officer and our armored Humvee to Albert Lea,” he said. “We then assembled the rest of the joint Austin/Mower SIRT and they responded to Albert Lea.”

McKichan said about nine members of the APD’s SIRT, along with the Humvee regular SIRT vehicle, responded to Albert Lea and assisted with containment, evacuation and perimeter duties.

“I spoke with a SIRT supervisor who responded,” McKichan said. “He stated that all responding agencies worked well together, that the Albert Lea Police did an outstanding job in handling this incident, and this incident was as dangerous and intense as anything he can recall responding to in his career.”

Law enforcement at one point tried to subdue Weiland with tear gas. Walker said Weiland reportedly became angry and fired shots through his apartment door into the hallway where he expected officers to have been assembling to breach the door. He suffered an injury to his forehead, though it was not yet clear whether that was from himself or others, Walker said, noting that the injury happened while Weiland was still alone in the apartment. After that, he ultimately surrendered to law enforcement in the building.

Authorities seized three rifles and a shotgun from the apartment.

Court documents state in an interview with authorities at the jail, Weiland reportedly acknowledged that he had made the initial call to law enforcement and that he had fired at the squad car.

He reportedly admitted to authorities that he had fired at another vehicle thinking it was a squad car and that he thought the police were going to take away his guns. He also admitted to firing several shots at an armored vehicle used by law enforcement at the scene and that he was angry they had used tear gas. He reportedly said he fired about 75 rounds, court records state.

He said he was sorry and wanted the agents who interviewed him to convey that to the multiple shooting victims.

During the court hearing Tuesday, Weiland appeared in a suicide suit with a bandage on his forehead.

When discussing bail, Sanders said while there was no question the nature of the alleged offenses were serious and that the incident has garnered media attention, he asked Leuning to consider other factors as well.

He said Weiland has family members in Albert Lea and grew up in the Fairmont and Mankato area and had limited criminal convictions — Walker referenced one conviction of disorderly conduct.

Leuning adopted Walker’s recommendation and said he would defer a conditional bail option to Weiland’s next appearance to give Weiland’s lawyers more time to review the case.

That hearing is slated for Dec. 10.

– Mike Stoll contributed to this article