Al Batt: The tunes from the Elvis of farm animals

How was your Christmas?

It was wonderful. I got everything I wanted. It makes me think.

About how lucky you are?

No, it makes me think I should have asked for more.

I have a wonderful neighbor named Bruce. Whenever I pass his drive, thoughts occur to me, such as: Hindsight is 2020. I try to have pinch-me dreams where COVID-19 is a Chevrolet model sold only in other countries. Nobody told us there’d be days like this and I’m trying not to take 2020 and its rough spots personally. I didn’t get a wreath of Franklin (a Christmas wreath made of $100 bills) as a Christmas gift, but there were many things during 2020 I was thankful for. No one likes masks, but I’m happy I remember to wear one. I’m pleased that eggnog and McRib come but once a year. I lost people who were important to me, but I’m grateful I knew them. I’ve learned every customer of this column is an essential person. I saw a rare celestial event, the great conjunction of Jupiter and Saturn. I couldn’t have waited another 60 years before seeing it. It’s good to know I can see 550 million to 1 billion miles. “I’ll Be Home for Christmas” is a lovely song but I wanted to say “duh” each time I heard it. I listened to Porky Pig singing “Blue Christmas” and realized he was the Elvis Presley of farm animals.

I reread “To Kill a Mockingbird” by Harper Lee and “O Pioneers!” by Willa Cather. I enjoyed them again. I recalled my first visit to Florida eons ago. I stayed in a room that had the smell of a microwaved, sweat sock. A sign claimed the motel had “Reasonable rats.” Someone had stolen the “e” from “rates” or it had been truth in advertising. The lodging came with Thomas Jefferson’s favorite bird, a mockingbird. The one stationed outside my Florida room sang loud, hopeful sounds in a spirited attempt to attract a female. It sang all night. I put wet tissue paper in my ears to sleep. I wanted to gather up aggravating noisemakers to use near the mocker’s napping place as I organized an endless parade featuring fireworks and bad bands. But despite the lack of sleep, I enjoyed the mockingbird’s company.

Cather reminded me that people always think the bread of another country is better than that of their own.

I also read “Janesville: An American Story” by Amy Goldstein. It told the story of a Wisconsin city after its General Motors assembly plant closed. Some workers transferred to a GM plant in Fort Wayne and stayed in Indiana during the week before rushing home on weekends. Three were in a car traveling the 280 miles home when one asked, “Think we’ll get lucky and get a double raccoon tonight?” One night, they had hit two raccoons. As many road-killed raccoons as I see, that can’t be an odd occurrence.

I didn’t watch a Christmas movie this yuletide, not even one of those where a successful, handsome man or an attractive, successful woman returns to the hometown they’d discarded and discover Christmas. Instead, I listened to the late Fireside Al Maitland read “The Necklace,” a short story by Guy de Maupassant that presents the power of perception and Frederick Forsyth’s “The Shepherd,” an imaginative ghost story on “As It Happens” from CBC radio.

The range of an eastern cottontail is about five acres (the size of four football fields).

Once settled into its winter home, the striped skunk becomes dormant but doesn’t enter a full state of hibernation. Skunks enter torpor – a deep sleep from which they awaken occasionally. They may emerge briefly from their dens at any time.

I’ve been told when we hear a cardinal sing, our sadness will soon be lifted. And when we see a redbird in winter, we will prosper in spring. I’ve also heard that if a bird poops on you or anything you own, it foreshadows good luck.

Scientists once believed snowy owls came here because they were starving in the Arctic, having exhausted the supply of lemmings, their primary prey item. However, many of the travelers are relatively healthy and well-fed. Their visits may indicate it was a boom year for the birds and their population was so high they couldn’t all stay in the Arctic. The owls move for food availability or due to population density.

Tidings of comfort and joy to those good folks who work in grocery stores. They are heroes. 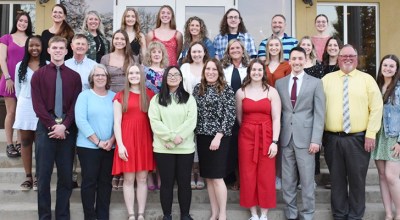