Mayo leader shares personal story of his battle with COVID-19

A Mayo Clinic Health System leader is sharing his personal story with COVID-19 to raise awareness of the virus and to encourage people to prepare a plan of what to do if their family contracts it.

Dr. Deepi Goyal, Mayo Clinic Health System regional chairman of clinical practice for southeast Minnesota, said his family was already in quarantine after his daughter tested positive for COVID-19 when he started having muscle aches and a low-grade fever. Then came extreme fatigue. 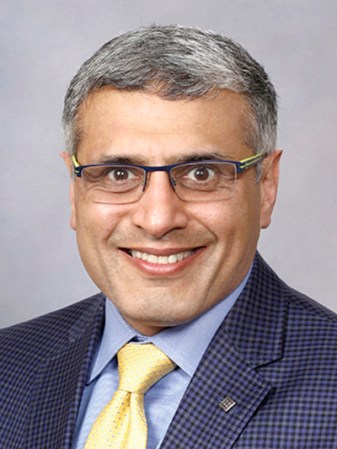 He said his daughter was believed to have contracted the virus while at work, and when he and his family found out she tested positive, they did everything they could to separate themselves from her. He started developing symptoms about nine days after she was diagnosed, and he was tested and found positive for the virus.

Goyal said his symptoms were comparatively mild though not insignificant. He had about four days where he slept 12 to 15 hours a day, but he didn’t develop severe symptoms like shortness of breath and did not have to go to the hospital.

What he found surprising, however, was how long it took for him to return back to his normal condition — an estimated three weeks.

“I can just imagine for people with pre-existing conditions or who may not be as healthy,” he said. ‘This has really got potential to take a significant toll.”

Goyal, who has led the COVID-19 response efforts for Mayo Clinic Health System’s southeastern Minnesota region, said the experience emphasized to him what a different illness COVID-19 is from others the medical world has seen, along with how valuable the safety precautions such as masking, social distancing and proper hand hygiene are to keeping people safe.

It also taught him how important it is for people to have a plan for quarantine — including where and how they will quarantine, as well as logistical issues, such as how to get food, chargers, entertainment, books and electronics, he said.

He said southeastern Minnesota did a good job flattening the curve initially and in keeping the curve flat in recent weeks.

While going back to school is a “tough area,” he said he thinks it is doable to have some in-person school.

“It’s going to really be reliant on people doing the things they need to do to keep others in the classroom safe,” Goyal said. “That said, I think once you get people congregating, I think it’s inevitable we will see some increases in numbers, but I’m hopeful, being from the communities we’re from in this region that people will do the things that are necessary to allow schools to develop some element of normalcy again.”

He said there is broad recognition now that children can contract the virus and, in some cases, be more infectious than adults.

He stressed the importance of getting flu vaccines early this year and noted that many of the measures in place to help prevent the spread of COVID-19, will be good for preventing the spread of influenza, as well.