The Wide Angle: The art of overthinking and a garden

Because of conflicts related to the COVID-19 … wait, I’m sorry. It’s just muscle reflex at this point to state that something or other has been altered because of COVID-19.

So, what should we talk about today? How’s your coffee? Those eggs look good.

I took a walk outside the house Friday morning and took a gander at the garden and, aside from my continuing struggle with green pepper plants (I really don’t know why I struggle with peppers, but should this year prove again to be a failure, then I’m walking away from them — stupid green peppers), everything is looking pretty good.

Broccoli is a new addition this year so we’ll have to wait and see on that, but the plants are standing upright currently, so I have to take that as a positive.

The cucumbers are behaving so far, though I’m hoping that things will remain under control thanks to the large space I left for them to spread out and the contraption I plan on putting together in order to give them some place to climb where they aren’t strangling the other plants.

Beans are sprouting well in a row like they should, carrots coming up straight and the beets are expanding their green leaves. 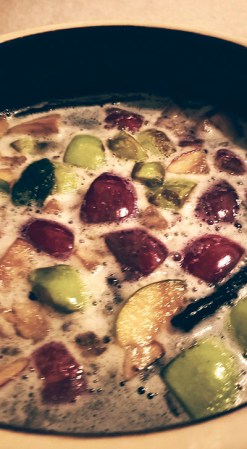 Unrelated to the garden, this is my latest batch of mead taken by a cellphone in poor lighting by a supposed trained professional. This batch featuring apples, cinnamon sticks, cloves and nutmeg is Christmas in a crock and will test whether or not I can wait until December to truly taste it.

Most importantly, I seem to have finally come to a point where I’m winning against the creatures of the backyard.

I hesitate to say that everything is going swimmingly at the moment, which is something I haven’t really been able to say in years past. It’s to the point where I’m starting to think I’m missing something, which is a character flaw I’ve honed over the years.

I’ve come to perfect this flaw during my time on planet Earth to a point where I almost need some sort of hiccup just to make everything feel better. I don’t really NEED it to feel accomplished for determining and fixing the problem. I need it because I feel empty at the lack of it, only to continue thinking I’m missing something.

You would call it unnecessary paranoia and you would be right.

Generally, when I have this feeling of missing something, I’m not altogether wrong. Most of the time it’s something small I can live with, but there are times when it causes a true and mighty headache.

So, I stand and ponder my garden for long moments of time, waiting for it to talk to me and let me know what it is I’m missing.

Normally, I don’t hear much from it, except the one time I heard, “Build it and he will come,” and I answered, “Build what, where you stupid plant!?”

The last time I truly forgot something in regards to the garden was my first year when I failed to really research the plants I got, which led to a royal rumble of tomatoes, cucumbers and vine beans at the center of the garden.

I spoke often of that my first year, and it still remains one of my favorite examples of overlooking something, even though I failed in my plans to create a tomato-cucumber-bean hybrid. The tocumean.

Then again, I’m not sure that’s how science even works.

It might be easy enough to say I overthink things, and you’re not altogether wrong. Case in point, I hate shopping for cars. HATE IT, and it comes from knowing so little about them. I’m not a gearhead. Never have been.

Can I stare at them, nod and go “Mmmm, hmmm?” Absolutely, I just don’t know what I’m staring at, thinking about or agreeing to. I know there is something about it I should be aware of, but no matter how hard I think about it, it’s just a bunch of complicated metal on four wheels.

And so people will tell me what to look for and help guide me through the process of making good decisions, whereas primarily my car shopping comes down to three major areas: fuel efficiency, color and stereo.

Fuel efficiency is important because I need to make every mile count, I’m not going to drive around town in a canary yellow vehicle and I like my music.

I know I should be paying attention to more, but in the end it just becomes a headache involving staring at the ceiling at night and thinking, “yellow is a stupid color.”

Well, it is. Sorry to disappoint Reader No. 9.

So yes, I’m a creature of overthinking and that won’t change that much going forward I don’t suspect, considering it’s been with me from my earliest days, but I’ve come to accept it.

That and the voice asking me about construction costs of a baseball field in the back yard.

The prestigious P.E.O. STAR Scholarship for the 2020-21 academic year, was presented to Katie Lillemon, who graduated from Austin High... read more