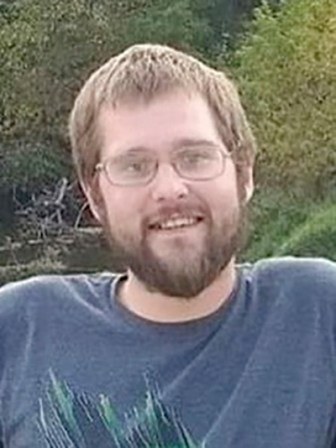 Evan was born Nov. 14, 1988, in Kenyon, Minnesota, to David and Rebecca (Miller) Kersten. At age 5, his family bought a home near Rose Creek, Minnesota. In 2006, at the age of 18, Evan moved to a mobile home in Austin. In May of 2019 he purchased a large two-story home in an Austin family neighborhood. Evan attended Southland Schools and then went on to take a Minnesota Department of Health Training Course for certification as an asbestos inspector and as an asbestos site supervisor. Evan worked for K-Mart for seven years, starting as a part-time sales associate and then getting promoted to a full-time department manager. He worked there until the Austin store closed. Evan then began his career working for Pepsi, starting as a part-time merchandiser and then was promoted to a full-time merchandiser. He was currently interviewing for jobs as a Pepsi sales rep, looking to move up again. Evan also worked for his father David’s inspection business, Enviro Tech Services of Austin, while holding his full-time jobs. He used his asbestos inspector certification to work part-time alongside his dad for more than 10 years. The business languished after his dad’s passing, but in recent months, Evan had renewed his asbestos license and was ready to get the business officially restarted. Evan enjoyed working on cars and restoring or modifying them. Among his favorites were G-body cars like the Monte Carlo. He also loved luxury cars like Lincolns and Cadillacs. Evan always had a special love for Trans-Am cars. He will be dearly missed by all who knew and loved him.

A memorial service to celebrate Evan’s life will be held at a later date. Worlein Funeral Home of Austin is assisting the family with arrangements. Condolences may be expressed at www.worlein.com.