According to Mower County Health and Human Services Division Manager Pam Kellogg, the latest cases have affected people ranging from late teens to mid 50s. Kellogg also said that 17 Mower County cases are currently in isolation, though none have been reported as needing hospitalization. 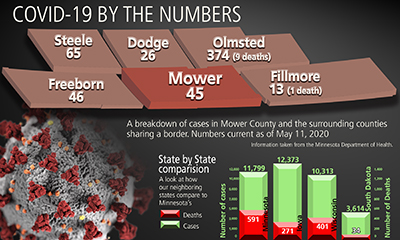 Statewide, the MDH reported an additional 1,711 cases confirmed over the weekend, bringing Minnesota’s total to 11,799 since March 6. Of that, 7,536 no longer need isolation. The MDH also reported that 452 Minnesotans were hospitalized on Monday, including 194 in intensive care.

The MDH also reported 57 deaths since Friday, bringing Minnesota’s total to 591 deaths since March 21. Of that, 472 were residents of long-term care or assisted living facilities. Eighty-two percent of reported deaths were among patients ages 70 years and older.

Trump faces virus at White House amid push to ‘reopen’ US

WASHINGTON (AP) — As he encourages the country to “reopen,” President Donald Trump is confronting cases of the coronavirus in... read more