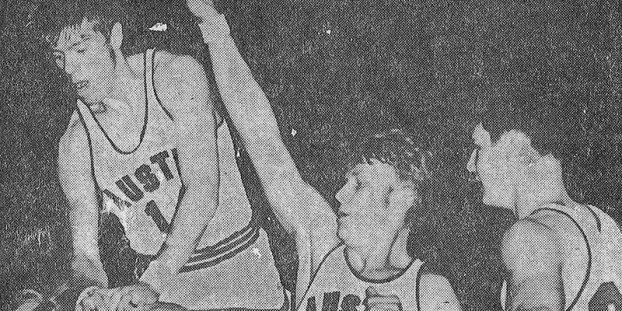 Rick Knutson, left, jumps over a Red Wing player during a game when he was in high school. Photo provided

Long before the Austin Packer boys basketball team was dazzling fans with dynamic dunks and pin-point three-point shooting, Rick Knutson was trying to live up to the standard set by Wayne Lerud.

Knutson idolized Lerud while growing up in Austin and he was eventually inducted into the AHS Hall of Fame in the same class as his role model.

Knutson, who stood at 6-feet tall, was able to rise up and dunk as long as it was in warm-ups and the refs hadn’t arrived yet.

“Back then it was a technical foul to dunk and that’s a crazy rule when you watch basketball today,” Knutson said. “It was kind of fun then. There wasn’t a lot of dunking going on, but for a guy 6-foot to dunk it, it was kind of neat.” 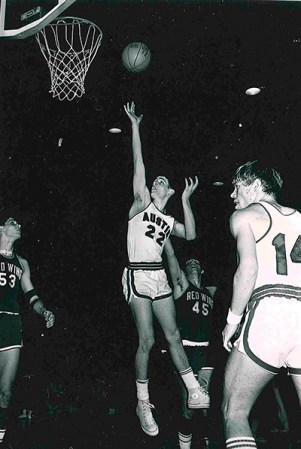 When Riles, who finished with 1,032 career points, was in the middle of his pursuit of his scoring title, he recalled a big game in Mankato, where a few of the students had produced an eight foot poster of a caricature of him with a bologna ring around him. It was titled “Number One Weiner.”

“It was me dragging my warm up jacket with my number on it and I had these knobby knees,” Riles recalled. “It probably motivated me a little bit. I was also impressed with the artist and how they did that.”

Riles, who taught for 37 years and is now retired in St. Michael, has as much perspective on the Packers of the 70s as anyone. He played with Knutson and he was next door neighbors with Kallenberger.

“It was a great place to be and I had a lot of friendships that I keep to this day. We had some great coaches,” Riles said. “I looked up to Rick. He was really a big time scorer. If we would’ve seen the three-point shot back then, Kal would have killed them. He shot a ton of deep shots.”

Kallenberg and Riles led the Packers to the state title game after they were trailing Minneapolis North 18-0 in the first round of the state tournament in 1972. Austin beat North Saint Paul, but it lost to Mounds View, a team that featured Mark Landsberger, who went on to play for the Minnesota Gophers, the Chicago Bulls, Los Angeles Lakers and Atlanta Hawks.

High school sports were much different back in the 1970s and basketball was no different. There was no AAU, no weight lifting, no basketball camps, and no traveling leagues. Junior high basketball teams had just four games per season.

Despite those factors, basketball boomed in Austin. Riles recalled 40 players going out for basketball when he was in seventh grade. By the time he made it to the B squad team, he was one of 35 players who would jam up and practice in a small gym.

Knutson missed out on the state title game in 1972, but he still had his time to shine. His favorite memory was in his junior year in 1969, when he scored 23 points as a sixth man in an upset over No. 1 ranked Waseca.

“They had a 6-10 guy and a 6-11 guy and I just stood at the free throw line,” Knutson said. “I had my confidence where I could come off the bench and I could make shots.”

Knutson is now retired after working as a school custodian for 41 years. He  helped work to set up games for 10 of those years and has been able to watch the Packer basketball team emerge into a state contender for the better part of the last decade.

“I’ve been going to games for the past eight or nine years and these kids are phenomenal to watch. We’ve had some great basketball here. Those kids are so quick and fast, and it’s amazing how they can jump. It’s been fun to watch them,” Knutson said. “I think today the game is faster. I don’t even know if I could make the team today, as quick as these kids are. It’s unbelievable.”

Knutson said that Lerud and Riles are two of the greatest shooters he had ever seen play for Austin. He also remembers the crowds that basketball games drew in the 1960s and 1970s. Not only was Ove Berven Gym packed, the auditorium next to Ove Berven was opened up and that would be filled as well.

“Everything was focused on us,” Knutson said. “When you saw a small town beat a big school, that was a big deal. When these small schools played, the whole town played. I remember as a kid, watching Albert Lea play Lyle. You couldn’t get a seat.”

The Austin boys basketball team had a 30-year state tournament drought before its recent run and Knutson has enjoyed watching the surge of the program. Riles has taken in a few games of the Packers at the state tournament and he loves their style of play as well.

“I think it’s really great for Austin. We’d been down for so long,” Knutson said. “Fadness is a heck of a coach and what I like about him is they play such good defense and a lot of teams can’t break their half court trap. Nobody plays defense like Austin.”

Lerud, Knutson, Riles, Kallanberger and Clingman were coached by Oscar Haddorff, who followed Berven as head coach of the Packers. Fourteen players from Austin have led the Big Nine in scoring since 1950, dating back to Olympic Gold Medalist Burdette Haldorson, who put up 25.4 points per game in 1951.

Kallenberger and Riles are both in the AHS Hall of Fame.

Mayo Clinic announced Friday it will implement temporary salary reductions and furloughs of some staff after April 28 in its... read more