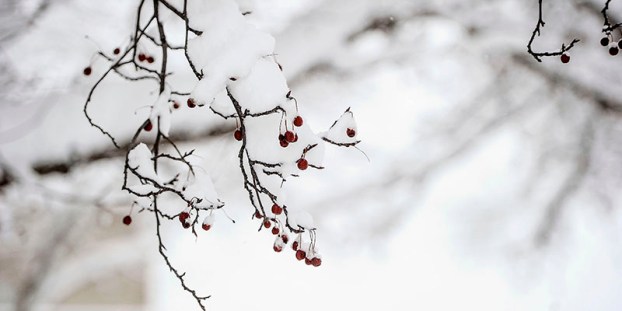 The projected forecast for Friday's storms has changed little with its affects being felt starting around noon. Herald file photo

Friday’s winter storm, which is expected to affect a large portion of Minnesota and Iowa, is still on track despite a very slight dip in snowfall totals.

Snow will begin to fall mainly after noon today and could be heavy with 3 to 5 inches expected, but instead of the 2 to 4 inches of snow originally predicted to fall Friday night, the total has shifted slightly to 1 to 3 inches.

As the system moved ashore off the Pacific Ocean Thursday, forecasters became a little more focused on the storm’s track, feeling there would be very little change in the forecast. 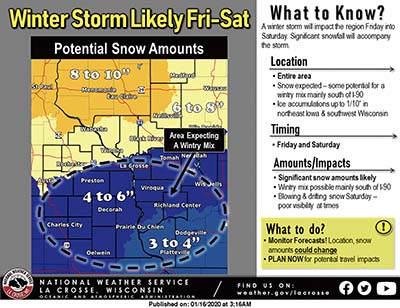 “The storm track is still a little bit unknown right now, but generally speaking I think we can expect 1 to 3, 2 to 4 inches Friday night,” said National Weather Service Meteorologist Dave Lawrence. “Overall, we’ll be in the 4 to 6 inch range.”

Lawrence went on to say that the heaviest snowfall will come in the early afternoon through early evening hours.

The snow will start out as heavier, wetter snow and travelers can expect night time commuting to be impacted.

However, the biggest uncertainty of the storm will be the transition from the wetter snow that will initially fall and the impact the drier snow will have as temperatures cool going into the weekend.

“We will start out on the wetter side and then change to drier into Saturday,” Lawrence said. “That’s the other component. Going into Saturday and as the snow gets fluffier, there’s a window for significant visibility reductions. Blowing and drifting snow will be a problem.”

Winds are expected to become a problem throughout the day into Saturday with gusts near 40 mph possible as temperatures are expected to dip again after the storm passes with highs in the single digits starting Sunday.

Even though the snowfall totals are expected to be in the 4 to 6 inch range, Lawrence stresses that it’s the fallout from the storm that will be significant to watch. 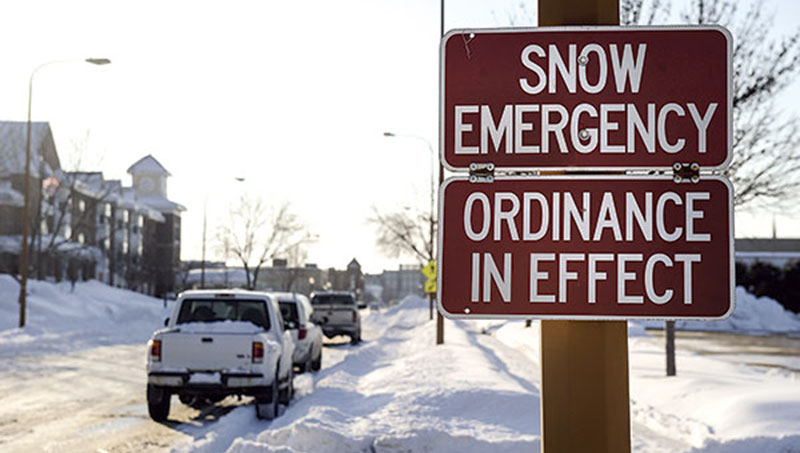 The city of Austin has instituted a snow emergency parking ordinance starting at 8 a.m. Friday. The ordinance will be in effect for 72 hours.

Parking in the business areas will be prohibited between 1-8 a.m. during the 72-hour period. Business areas include midtown Austin, Sterling Shopping Center, the Hormel plant area and east side business area.

Area gearing up for 1-2 punch

First comes the cold and then comes the snow. As the area braces for significant snowfall on Friday, we will... read more