Amidst the touring, visitors saw the grandeur of a building that took over eight years to bring to fruition. During a presentation, Diane Baker, executive director of the YMCA at the Community Recreation Center lauded those that donated to the cause of bringing this striking building to downtown.

“You are here because you all made this possible,” she said as she teared up during the speech.

During the presentation Sally Baker and Jim Splinter took turns breaking down the length of the project over the eight plus years of the project. They  recognized those involved as well as those organizations that gave to ensure that Austin had a one-of-a-kind building for family recreation and fitness.

When the effort to build the recreation center in Austin began in 2012, it was quickly realized that a number of different groups of people would need to come together to make it a reality. The price tag was set at $35 million, helped initially by a $25 million commitment from the Hormel Foundation with $5 million being kicked in by Hormel Food Corporation.

However, that still left a $5 million contribution that would need to come from the public. 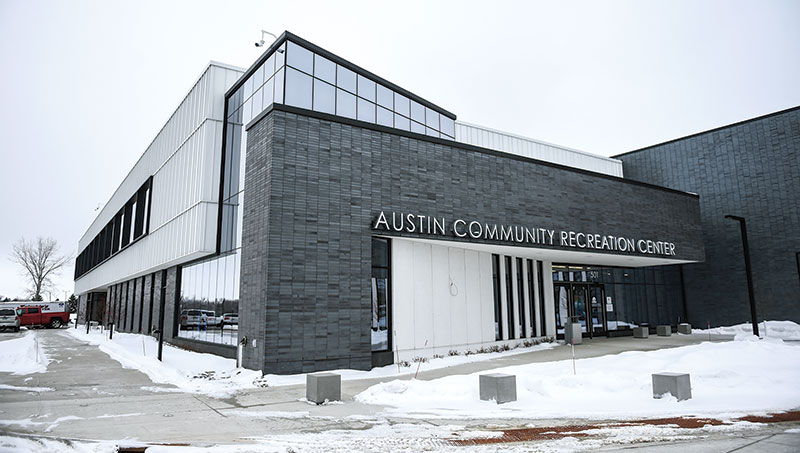 In just a few short days, the Austin Community Recreation Center will be ready for its opening date of Monday. Eric Johnson/photodesk@austindailyherald.com

The project ran into a problem though when unexpected costs drove the cost of the complex up to $36 million, requiring $6 million to be raised through the public. To that end, however; Hormel Foods once again stepped in, vowing to match all money raised from its employees who gave to the project, resulting in another $1.5 million toward the public campaign.

Hormel Chairman of the Board, President and CEO James Snee said it reflects a community that is willing to go above and beyond to complete a project that would have this kind of an impact on the community.

“It’s huge. It shows the commitment and dedication to this community,” Snee said after the presentation. “They knew this community needed it and the impact it was going to have. Beyond that there are just some incredibly generous people in this community.”

Another way to help pay for the public end was opening up naming rights to various rooms within the center and it was Jeff and LeAnn Ettinger who donated to get naming rights for the main gym and the name they wished to put on the gym seemed fitting.

“(When it came to the) naming opportunity for the basketball gym, who else could you name it for other than Fads,” Jeff Ettinger said, referring to long-time boys basketball coach Kris Fadness, going on to say, “This is where it starts for so many boys and girls.”

A coach in Austin for the past 23 years, Fadness has ben instrumental in formulating the basketball program to what it is today, however; Fadness was quick to credit several people for the program’s success, especially the players he has coached over the years.

“I want to thank our players,” Fadness said. “They’ve worked for this. It’s not about wins and losses, it’s about relationships.”

Fadness also stressed to players the respect for the court and those that play on it.

“Make them respect this facility and what Austin basketball is all about,” he said.

As the crowd began to break away and people started walking around the facility for a bit more, Diane Baker had the chance to reflect on everything it took to get to this point.

“It’s spectacular,” she said. “I walked upstairs and walked into the spin studio and I got teary-eyed. This building is pretty special. It’s like no other Y. It’s just so unique and it’s bringing everybody together.”

However, that doesn’t mean the job is done yet. With four days until the 5 a.m. public opening on Monday morning, Diane Baker stressed there is still plenty more to do.

“We’re not done yet,” she said. “The Y closed on Sunday and we still have a lot of work to do. We open on Monday at 5 a.m. and we have a long way to go, but the staff that have stepped up and put the work in, it makes me happy. It’s so fun and rewarding.”

Despite that, it’s a chance for Baker and staff to take a step back and take a deep breath.

SPRING VALLEY — The end of an era is drawing near at Deer Creek Speedway. The Queensland family is looking... read more