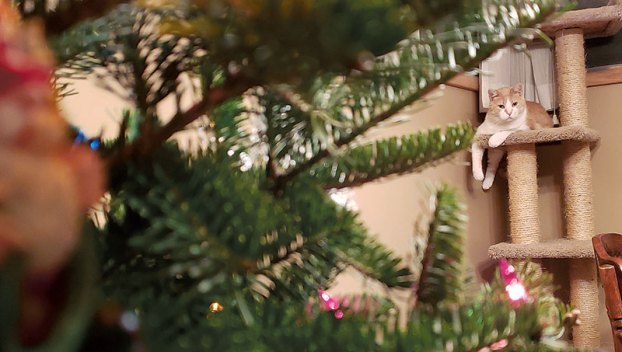 The Ghost of Christmas Past, Present and Yet to Come is curious as to why he can’t haunt the Christmas Tree. Eric Johnson/photodesk@austindailyherald.com

The Wide Angle: ‘A Christmas Pain,’ by Eric Johnson

Buster was naughty to begin with. There is no doubt whatever about that.

The Mower County Historical Society’s documents were signed by the volunteers themselves. We signed them and our signatures were good on whatever documents we have placed them.

I write this first part, using Charles Dickins’ famed work “A Christmas Carol” as a guide, because it was on a Tuesday a week before Christmas that I found myself most peculiarly writing a sequel to my Christmas tree column, something I should say from the start I had no particular interest in pursuing.

I figured that one column about a Christmas tree would be sufficient to cover all other columns on the subject, but as it has been summarily laid out before you in these opening paragraphs that I was visited by the Ghosts of Christmas Past, Present and Christmas Yet to Come, I figure I owe it to those who cast eyes upon these words to continue this story so that you may truly understand how I came to find myself lying upon my side, beneath our Christmas tree on a cold Tuesday night in December.

Buster was naughty to begin with.

The Ghost of Christmas Past visited us three weeks prior to Christmas when we, as you no doubt remember, wrestled our fat, stumpy and short tree into the house.

Buster and Nemi both appeared as the ghost, prowling about the tree in order to remind me of my youth and those cats that have come before.

They pointed out the youth I had lost when I laughed at those cats pacing about our tree back home and that this youthful feeling should come back.

Naturally, we smiled and laughed as  our own cats played about the tree.

The Ghost of Christmas Present was only Buster this time, coming to me on the wings of a text message from home, telling me that Buster was still trying to get into the tree water.

This was something that had been a challenge from the beginning and was something he hadn’t really tried before. As is his want, Buster managed to begin rubbing nerves by clawing and reaching into the tree and the water, which ultimately led me to my position of laying on the floor beneath the tree at 10:30 p.m. Tuesday night.

On the way home from work, I struck on an idea of truly cobbled-together portions involving cardboard and duct tape.

It was hardly revolutionary, nor was it eloquent in any such manner, but it was hoped that should I make it tall enough and close enough it would deter him from trying to reach the water.

My first challenge, however, was to trim it of branches at the bottom, which is probably something I should have done in the beginning, but there you have it. Apparently, the Ghost of Christmas Past forgot to tell me a few things.

Naturally, this drew both Buster and Nemi’s attentions as they both watched me shave and trim the cardboard to manageable dimensions, before wrapping it about the tree and finally sealing it shut with the aforementioned duct tape.

I really thought I had hit on something and in my own significant handy-man way was rather proud of what I had going on under the tree.

It was even hard to see what I had really done.

Of course, after going through all this work and cleaning up, the thought dawned on me — “what’s to stop him from trying?”

The Ghost of Christmas Yet to Come.

The Idea slowly, gravely, silently, approached. When it came near me, I bent down upon my knee; for in the very air through which this Idea moved it seemed to scatter gloom and mystery.

Again, using Dickins’ story as a guide, I can fully explain how the idea slowly crept on me like a shadow of a man who could swear to having his keys just moments earlier, but yet can’t find them now.

Buster clawed and pawed at the barrier that moments earlier I had been so proud of, so it’s really unclear whether in the long run this idea will pan out or not.

I suspect that the smart money might be on Buster, but who can say for sure, only that I must keep Christmas as best I can.

From this night on, I had no further intercourse with Spirits … and may it always be said of me, that I knew how to keep Christmas well, if any man alive possessed the knowledge. May that be truly said of us, and all of us! And so, as Tiny Tim observed, God … Buster, get out of the tree!

Michael Stoll: These are not Christmas songs

When it comes to Christmas, some might define me as a bit of an Ebenezer Scrooge. No, I don’t mean... read more