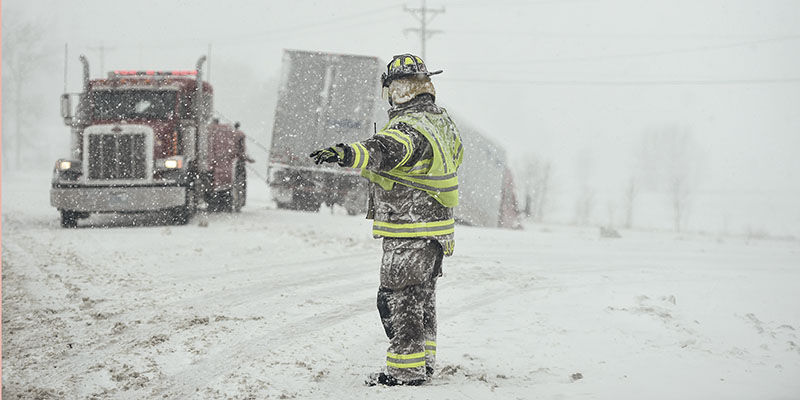 An Austin firefighter directs traffic at the scene of an accident in April. The storm had a massive affect on the area as power was lost in many areas throughout southeast Minnesota and was part of a chain of storms that rocked the Austin area early in 2019. Herald file photo 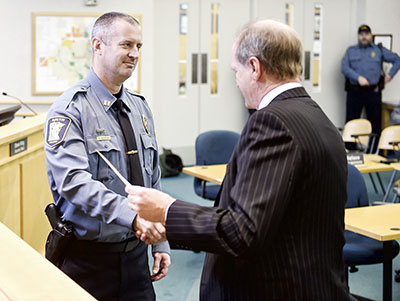 In early 2018, four-term Mower County Sheriff Terese Amazi announced that she would not seek a fifth term, leaving the sheriff’s seat open. 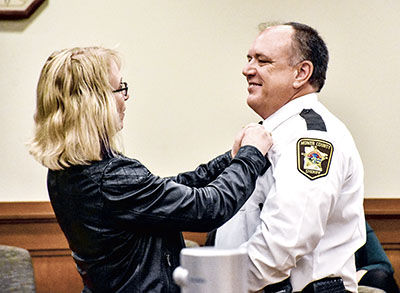 On Nov. 6, 2018, Mower County Detective Steve Sandvik was elected the new sheriff of Mower County. He was sworn-in on Jan. 7.

Austin Police Chief Brian Krueger also announced that he intended to retire. In January, the Austin City Council appointed Austin Police Capt. David McKichan to be the new chief. He was sworn-in on Feb. 20. McKichan’s promotion to chief then opened up the captain’s position, which was filled by Austin Police Detective Todd Clennon on April 29.

The Marshall’s site, photographed here near completion, was one of several businesses that came to Austin this year. Herald file photo

After some initial losses, 18th Avenue Northwest made some considerable gains in 2019.

The biggest closure on 18th Avenue for 2019 was Shopko, which closed its doors on May 12 after the company announced the closure in February. The closure was one of many in several states, the result of the company having to file Chapter 11 bankruptcy.

The old Target shopping complex saw a revitalization as Hobby Lobby and Ashley HomeStore both opened in the former Target building. Italian restaurant Bella Victoria relocated to that area and the Aldi grocery store in the complex expanded.

But the biggest story for 18th Avenue was the renovation of the old Hy-Vee. Slaby and Associates of Verona, Wisconsin, who purchased the old Hy-Vee from the Port Authority in 2018, poured in $5.4 million to renovate the building for retail use. Once the renovation was complete, the building became the home for Marshalls, Pet Supplies Plus, Shoe Sensation, Five Below, and Maurices, who relocated from across the street.

In April, Cobblestone Hotels broke ground at the construction site of a new hotel behind the old Hy-Vee building. An opening date has yet to be announced.

In March and April 2018, a nationwide manhunt was held for Riess, who was a suspect in the March 21, 2018, shooting death of her husband, David Riess, 54, who was found dead in their rural Blooming Prairie home. While on the run, Riess murdered and assumed the identity of 59-year-old Pamela Hutchinson of Brandenton, Florida, on April 9, 2018, at a Fort Myers Beach condo.

The State of Minnesota has begun the extradition process to bring Riess to Dodge County, where she is facing first and second-degree murder charges in the death of David Riess.

On March 15, the body of 2-year-old Noelani Robinson was found along the side of Highway 218 just north of Blooming Prairie four days after her mother, Sierra Robinson, 24, was shot to death in Milwaukee. Law enforcement issued an Amber Alert after the toddler’s mother was killed.

Police believed Noelani was killed by blunt force trauma; the Bureau of Criminal Apprehension confirmed that was indeed the cause when they released the results of their investigation in September.

The area experienced more snow than usual this year, with the City of Austin declaring several snow emergencies in the process.

A storm that hit the area on Feb. 23 brought February snow totals to over 30 inches in Mower County. The heavy snow and high winds made travel treacherous, even causing parts of Interstates 90 and 35 to close.

During the weekend storm, numerous motorists had to be rescued by emergency services. Gov. Tim Walz declared a state of emergency and ordered the Minnesota National Guard to provide assistance and emergency relief services for stranded motorists in Freeborn and Steele Counties.

Walz again declared a state of emergency after an April snow and ice storm struck the area, knocking down power lines and causing many to be without power for as long as several days. Austin’s National Guard unit assisted law enforcement in setting up barricades on roads where downed power lines posed risks to motorists.

Freeborn-Mower Cooperative Services estimated about $3 million in damages occurred during the storm, with roughly 12,000 customers in the rural areas losing power. 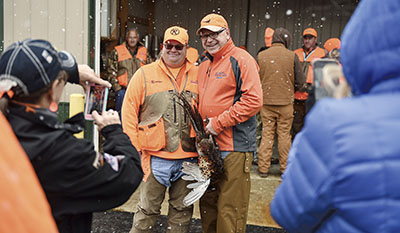 For one weekend this October, Austin and the surrounding area became ground zero for all things hunting.

The event was a culmination of over a year of planning by a dedicated committee. The banquet, which kicked off the weekend on the Friday before the hunt, drew 457 people and on the snowy day of the hunt, 44 roosters were taken.

Walz himself bagged the first bird by a governor since the event’s inception.

“Hats off to the people that helped,” MNGPHO Committee Chair Sandy Forstner said as birds were being registered at the Jay C. Hormel Nature Center. “There’s been a lot of people involved and I think it’s gone as well as it could have.” 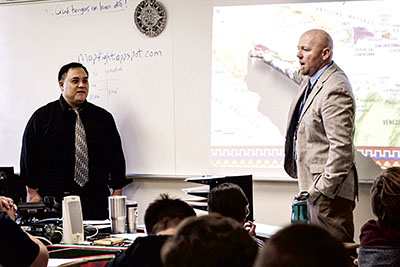 In a trend around the state this past year, several Minnesota schools had referendums on the ballot in November and special elections.

And for the most part, these referendums passed, including Lyle Public School’s own referendum by a count of 188-142. The vote secured an increase to the operating levy authority to $850 per student. It was an important moment for the school because a vote turning down the referendum would have put the school in a tough spot that could have led to cuts in programming and staffing.

“Lyle has shown another investment in their children,” said Lyle Superintendent Bryan Boysen. “They’re shaping the future of your town and community. They’re joining an educated society and are the fabric of the small town. We’ve got to keep the place going, and passing this (levy) puts a lot of people at ease.”

However, during an April special election, Austin voters turned down $24.888 million school referendum package that would have allowed for 16 new classrooms, a gymnasium, office space, a kitchen and cafeteria remodel and new playground installation at Woodson Kindergarten Center.

Had the referendum passed then the school could have continued to meet early childhood program needs at the newly renovated school; however, with the referendum failing, the school will continue leasing space at Queen of Angel’s Catholic Church. 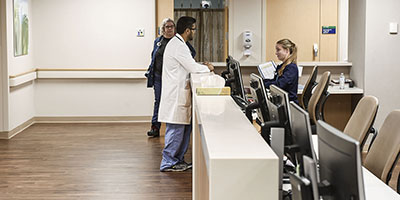 The newly remodeled medical and surgical care unit is up and fully operational with consolidated services from Mayo Clinic Health System-Austin and Albert Lea, just some of the major work at the hospital this year. Herald file photo

It was a big year for Mayo Clinic Health Systems-Austin as it continued to make renovations to its building in Austin as well as playing host to a newly consolidated birthing unit.

It was made official in June when Mayo Clinic Health Systems-Albert Lea and Austin officially moved the birthing unit to one location in Austin. It was the third step of a process that began in 2017, which included moving of psychiatric services to Albert Lea in 2018.

The rest of the renovations of the hospital include modernized medical/surgical, pediatrics unit on the second floor and continued remodeling of the Family Birth Center on the third floor with expanded rooms for caesarean sections and other surgical needs.

Also ongoing is a linking building project that when completed will link the main entrance of the building to the newly expanded units. It will add about 5,000 square feet of usable space and provide access to the elevators at the front entrance.

The entire project is slated to be completed by late 2020. 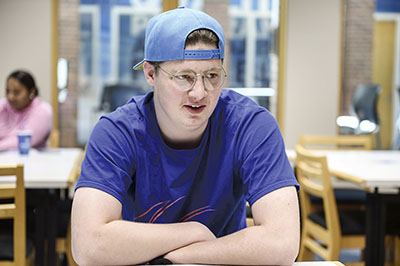 A graduate of Pacelli, Trace Fishbaugher was one of those students who took advantage of the Austin Assurance Program in its first year. Herald file photo

When it was first announced in 2018, the Austin Assurance Program offered a chance for all high school students in Austin an opportunity to get a free college education and this first year in 2019 showed that students were willing to take the opportunity.

About 110 students from Austin High School and Pacelli Catholic Schools enrolled in Riverland through the Austin Assurance Program, which allows students to enroll at Riverland Community College, free of charge, provided they hit certain criteria, which includes grade-point average and volunteer hours.

“It’s both gratifying and satisfying to have this program benefit students and also benefit their families,” said Jeff Ettinger, president of The Hormel Foundation, which funds the program. “Our expectations are that enrollment numbers will continue to go up and we will continue outreach at Pacelli and Austin. We recognize that this is just the start.” 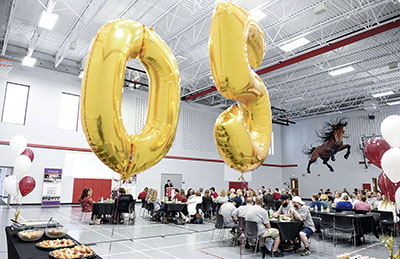 Gerard Academy in Austin has long been helping children by providing psychological, psychiatric and behavioral services. In September they celebrated 50 years.

“It’s about the people; it’s about the lives impacted, the families, the staff – all working together to make a difference in peoples’ lives,” said Executive Director Karen Wolf during the festivities.

It gave the sons of Joseph “Doc” and Patrica Endres an opportunity to see first-hand the good the organization has done for children over the years as both Tom Endres and Todd Endres were on hand for the celebration.