The Wide Angle: My adventures in hunting

I was feeling a lot of deja vu last weekend while covering the Minnesota Governor’s Pheasant Hunt Opener.

While completely different animals, the GPHO was very similar to the Ringneck Festival & Bird Dog Challenge I covered while in Huron.

For one, there was hunting — kind of a given, but two, there was also a quality festival atmosphere with both events.

The Ringneck Festival is in its 22nd year over in Huron, taking place Oct. 31-Nov. 2. Teams of six hunters attempt to bring a team maximum of 18 birds with each hunter getting just four shells. Meanwhile, the Bird Dog Challenge was simply that. A challenge to test a dog’s skills in a competitive atmosphere.

I was there for the inception of both events and have plenty of fond memories.

I can remember plenty of long days, with exceptionally long hunts, and I can remember being in the field for no more than 10-15 minutes. That was rare, but it was still an indicator of how many pheasants and the kind of hunting South Dakota has to offer.

One question I received in both places, however; was do I hunt or will I hunt?

The simple answer is no I don’t and no I won’t. Not because of any personal ethics stance or as some sort of objecter. I just don’t hunt. I was never very good at it, and quite simply it didn’t appeal to me.

Plus I was and am an absolutely terrible shot, which is the obvious result of not practicing. Again, I never had much of an interest.

My lack of hunting skills was pretty evident early on in life. As I’ve stated in columns before, we had two labs when I was growing up. Barney and George were great dogs and were good at hunting until I was introduced into the mix. Then it sort of became a free-for- all. 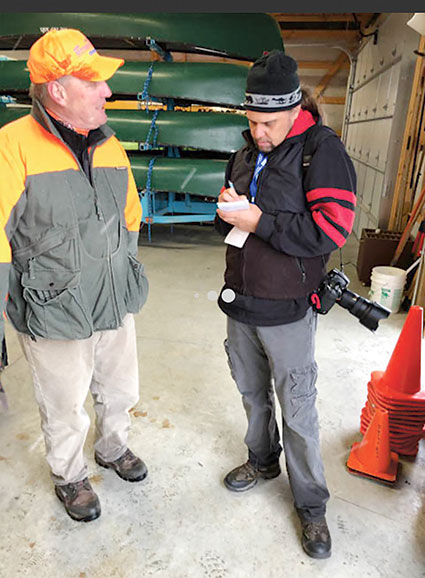 My parents attempted to make hunting a family adventure from time to time. That meant pheasant hunting with them around the area or partridge hunting with my folks and grandpa up north.

Adventure yes, hunting no. I kind of wonder if mom and dad even had shells in their guns for the most part, because when everything was all said and done, pheasants went on to lead healthy lives.

Barney and George often times reacted directly to my actions of play. I would often take a toy Tommy gun with me, running through the fields of World War II as my parents attemped to keep some type of control. I was playing, and then the dogs were playing, and then pheasants were moving to another field four miles down the road.

The amount of distraction I became was heightened by distracted dogs trying to take part in my shenanigans. Not to mention my parents, who did get birds occassionally, getting distracted by where I was, which was often getting lost in the grass. It was pretty important not to get in the way of live fire, unfortunately, it fell to mom and dad to make sure that didn’t happen. I wrote this column so … SUCCESS!

As I’ve said, my parents did get their pheasants, but it wasn’t without its headaches — three headches total.

I thought about these things — the Ringneck Festival and my time hunting with family — as I was walking the fields with my team this past weekend. Certain things triggered these memories, like the work of the dogs in our group, except they were much better trained and also didn’t have a seven-year-old running around with a plastic gun either.

It was a long weekend — though not nearly as long for me as it was for those running the GPHO. But it was a fun weekend all the same.

Being able to take pictures in the fall atmosphere of hunting has always been entertaining and is a great opportunity to get great shots.

I don’t even let the dogs distract me anymore.