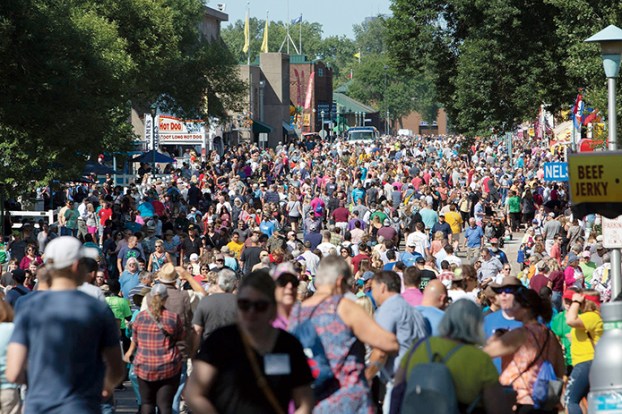 A crowd packs onto the street on the opening day of the Minnesota State Fair on Thursday, Aug 22, 2019. Christine T. Nguyen /MPR News file

For the fifth day this year, the Minnesota State Fair broke one of its single-day attendance records, with 245,243 people walking through the gates on Sunday. The previous record for the second Sunday was 242,759 in 2017.

Spokesperson Danielle Dullinger said the fair’s entertainment and programming with about 900 free shows has played a key role in the record number of attendance, in addition to the pleasant, not-too-hot weather this summer.

“More importantly than anything, I think that our entertainment and our programming has just truly stepped it up. Our vendors have stepped it up with their food and their different merchandise that they’re offering so we call ourselves Minnesota’s largest music fest,” Dullinger said.

With attendance records being broken every few years, could the fair add days on the front or back end? Dullinger said that’s not really possible.

“If we had school start, we’d lose a great percentage of them. And we rely on those employees, those high school students and college students to put on our fair,” she said. “So, at this point expanding is really not in the cards for us.”

And while the fair can’t go past Labor Day, it also can’t start earlier because many of the vendors are working at the Iowa and Wisconsin state fairs right before Minnesota’s begins, Dullinger said.

The fair is expected to announce final attendance totals on Tuesday.