ALBERT LEA – An Albert Lea man who brought a shotgun into Lou-Rich in July after he was dismissed from his job pleaded guilty Thursday in Freeborn County District Court to one count of threats of violence.

Phillip Jonathan Martinez, 37, admitted during the hearing that he came to the plant July 16 with a shotgun and asked for his supervisor, said Assistant County Attorney Abigail Lambert. 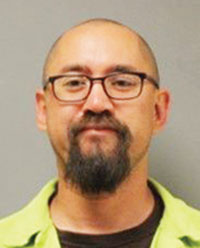 Court documents stated Martinez came into the plant with a shotgun on his shoulder and gave the maintenance supervisor a key fob and asked him to give it to his supervisor. Martinez then allegedly said “he had ‘something’ for his supervisor,” whom he referred to by name.

Martinez’s supervisor told police he was nearby when Martinez came in looking for him, though he did not have direct contact with him. The supervisor said he saw Martinez with the shotgun on his shoulder, though Martinez did not see him.

After he left the building, he walked to his house on Fountain Street, where he was later arrested as he came out of the house with a shotgun.

The incident led to the evacuation of some employees to the parking lot across Front Street. Workers from Larson Contracting — in Lou-Rich for construction work — evacuated earlier, after an Albert Lea Police officer entered the building with his weapon drawn and asked them to clear the building.

During the hearing Thursday, Martinez said he was angry with being terminated from the company the way he was. He also admitted to sending a text message to another employee who had texted him that there were rumors that he was at the building with a gun.

Court documents stated Martinez responded, “Yes, nobody gets away wit (sic) firing me with out it.”

Lambert said the presumptive sentence for the charge is a stayed sentence of 12 months and one day in prison, depending on Martinez’s criminal history.

He is scheduled to be sentenced Dec. 27.

Martinez was released from the Freeborn County jail on his promise to appear for the sentencing.