Richard was born on Aug. 20, 1928, in Austin, Minnesota. He grew up in a small two-story house on what used to be Lincoln Street, next to the Red Cedar River that runs through town. Back then, he would tell us, no matter how deep the water, you could see clear to the bottom.

At age seven, on the day his dad explained why he couldn’t afford to buy him an ice cream cone, Dick became a union man and a Democrat. 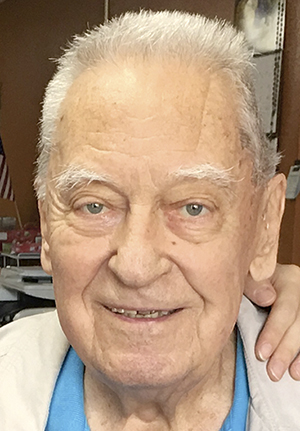 He was a river boy through and through – fishing endlessly, building rafts out of all manner of materials and visiting the hobo jungle next to the railroad tracks. Times were hard, and if any of them asked for work, he obligingly sent them to his house, where they would find a bite to eat, even if the grass had already been cut.

He ran with a colorful crowd, a ragtag bunch of maybe a dozen kids, who got into all manner of shenanigans as they roamed the open range of their imaginations. On Saturdays they’d head off to the movie house, where they could watch the latest westerns for a nickel.

After graduating from Austin High School, he enlisted in the U.S. Army and became company clerk for his unit in Korea. It was there in the barracks that he learned about standing alongside anyone being oppressed due to race, creed or color. He would later teach his daughters that “live and let live is not a complicated idea.”

Richard/Dick/Rocky was a fine father and a loving and true partner to his wife, Kathryn Ann Clark of Rochester, Minnesota. They met at a St. Patrick’s Day Dance, and he knew at first glance that this Irish lass was the only girl he wanted to take for a whirl on the dance floor. 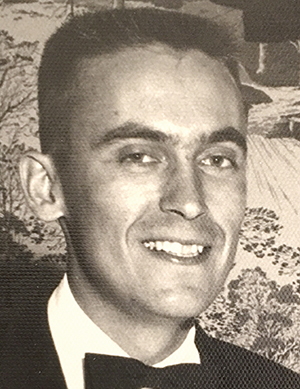 Raised Norwegian Lutheran, he attended St. Olaf Church in Austin. His relatives took a good, deep breath when he took up with the Catholics his bride ran with. The pair were married a year after they met, at St. Francis Catholic Church in Rochester, and their first daughter arrived exactly nine months later.

Dick and Kathy loved to go fishing together, and those were exceedingly happy days, with the exception of the time when he had Minnesota’s largest-ever northern pike alongside the boat and Kathy grabbed the small net instead of the big one. Eventually all three of their daughters, Ellen, Carol and Mary, joined them in the trusty green boat they called RickRock, from which many a Friday night dinner was caught.

Richard worked at the Hormel Company for 29 years, first in the general office and eventually in the plant. When the layoffs came, he was the oldest man of the first 300 to go. Soon after, he began a new career selling long-life industrial lighting with a company called Maintenance Engineering. He worked hard and did well. He said the key to being a good salesman is being a good listener. Dick retired after working there for another 21 years.

Eventually, Dick and Kathy moved to Decorah to be near family, not realizing how much they would also gain a village of friends who have filled their latter golden years with such grace – the taxi drivers and restaurant folks, hair stylists and grocery staff, health care helpers and hospice workers.

He loved to play and sing, but not at the same time, as his instrument of choice was the harmonica. He’d play the old polkas and waltzes and lively tunes he wrote himself, then take a break to sing old songs from the likes of Hank Snow, Hank Williams and Johnny Cash.

In the weeks approaching his death, his mind remained clear and he’d grin as he sang the old Roger Miller tune, “No matter how you struggle and strive, you’ll never get out of this world alive.”

Close to the end, he said the family and friends that were talking to him in his dreams, the ones waiting on the other side, were wondering what was taking him so long. Their gain is our loss; he will be sorely missed by his family and friends on this side, but he leaves behind so many stories and songs that in most ways, our Red Cedar River Boy will never be gone.

He was preceded in death by his middle daughter, Carol; his parents, Tony and Emma; his brother, David; and the three wonderful aunts who lived next door, Bertha, Clara and Margaret Rockne. He leaves behind his beloved wife, Kathy; daughters, Ellen (Eric Stahr) and Mary (Ron Brohmer); grandsons, Gabriel and Matthew; and many nieces, nephews and friends.

Looking to offer more childcare options in Austin, Pacelli Catholic Schools is stepping up to the plate with a new... read more