The Wide Angle: Overcoming first impressions with life on the road

Just a little over 15 years ago, I came to Austin from Huron, South Dakota, to become the photographer of the Austin Daily Herald.

As is always the case, there was change and adaptation to my new job. The work itself wasn’t so different: pictures were taken, photos were toned, so on and so forth.

But it was a new staff with a new routine. Lee Bonorden occupied the desk next to mine in those days. I would come to find out that was an institute of sorts.

Little did I know I was only scratching the surface.

A lot happened in those early days, but it was one moment in particular that has continued to stand out after all these years that kind of acted as a starting point.

Matt Merritt, another reporter at the time, was in many ways nominated to bring me up to speed on the newsroom and the town of Austin itself. Before what would be one of the several hundred trips into the county with Lee, Matt said, “He probably doesn’t like you much. Lee doesn’t like photographers.”

That wasn’t exactly the words Matt used, but I was still taken aback somewhat. I had only been with the Herald a couple weeks and already I was told I wasn’t liked by someone I initially started to see as a grade A, professional curmudgeon. I didn’t understand it. I was a nice guy and I can boast that people liked me or at least tolerated me. Lee hardly knew me and already I was a step behind.

Matt went on to urge me not to take it too personally, but it’s hard not to just after being told you probably wouldn’t be liked.

Observationally, I would suppose there’s a Lee Bonorden in every newsroom. A reporter that’s been on staff for years, who knows everybody and every place and can yank stories out of mid-air like a Vegas magician.

I had worked with a few already in my career up until that point, so this wasn’t a surprise. The surprise was that I could be disliked without doing anything to warrant it. That came with time.

However, now is the point where I tell you to forget everything above. To be perfectly honest, I will always cherish the years I worked with Lee, right up to when he retired in May of 2009.

It was Lee who largely introduced me to not just Austin but the area as a whole. I got to know the county through his connections and to this day still have people asking me how he’s doing when I visit communities like Adams or Grand Meadow.

On Tuesday of this week, I sat down with Lee once again and we visited about those days on the beat. You might have read the story in Wednesday’s Herald. It’s been 10 years since he’s retired, but we picked up again as if we were on the hunt for another story. 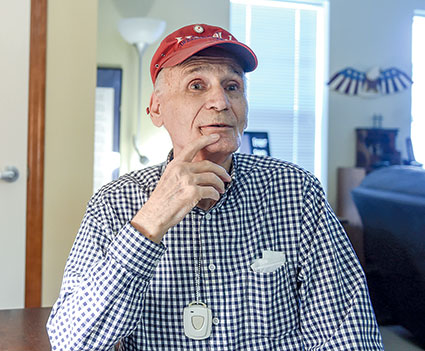 Lee Bonorden, probably still pondering if he likes me or not.

In many ways, Lee and I were kindred spirits. Sitting in the office for too long drove us both nuts. The two of us came to look forward to hitting the road during the week for some destination in the county for his weekly On The Road feature. It was often times one to two hours away from ringing phones and clicking keyboards. Just the road laying out in front of us and great, often animated conversation.

In those days, nothing was off the table — we talked about everything and anything and it could be argued that without Lee, I don’t have the connections I have today with these communities. Granted, covering sports in our area has helped, but it was Lee that got boots on the ground. It was easy for him to get to know people through the gift of pleasant conversation.

More often than not though, I was second fiddle. Likely, I was standing off to the side watching Mower County diplomacy between Lee and the subject of his story, inevitably shifting focus with the simple question of, “Say, do you know (insert person’s name)?” This was followed by naturally, a story.

Such was the case Tuesday as we talked. I found we spent just as much time “talking” as we did “interviewing” and that is the gift of working with Lee. It wasn’t always work. It was often times just sitting back and talking. Sometimes, sitting in the newsroom and talking to Lee was a lot like those two kids in the back of the classroom that wouldn’t shut up.

When my career comes to an end and some reporter asks me about my time in journalism, inevitably I will first tell a story about Lee Bonorden.

Right after I explain that my curmudgeonly self didn’t like them.