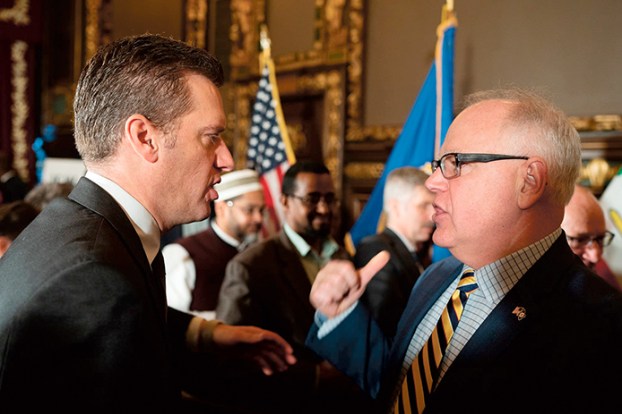 This legislative session was supposed to be different; Issues remain to be resolved as special session still looms

They promised things would be different this time — and they seemed to believe it.

But as early as this week, Gov. Tim Walz will have to call legislators back into a special session to finish work on a two-year state budget, the same outcome as three of the last four budget battles in St. Paul.

“I cannot change the culture single handedly, and I cannot do it overnight,” DFL House Speaker Melissa Hortman said after session adjourned at midnight Monday night with much work left on the table. In her first term as speaker after winning control from Republicans last fall, she was one of the key voices pledging a new way of doing things.

The pledges started as early as January, when Hortman and Republican Senate Majority Paul Gazelka said they would quickly pass bipartisan bills that were vetoed in a blowup finale last year that they said should have never failed in the first place.

A fee on drug manufacturers to pay costs of the opioid epidemic, a hands-free cell phone driving requirement and election security funding were at the top of the list. By the last day of session, only one of those bills had been signed into law.

They promised three-way targets: a wonky term for a broad agreement on state budget numbers that, for the first time ever, the governor and legislative leaders would determine together. And they would agree to them by May 6, weeks before the deadline to adjourn, they pledged. That date came and went with no targets.

Then, after a week of closed-door negotiations and on the eve of session adjournment, they finally agreed to a budget deal. It would pass within the week, they pledged. But by the close of business at midnight on Monday, only a single budget bill had been agreed to and passed on the floor of the House and Senate, far less than they had anticipated and putting an already tenuous budget deal in jeopardy.

In the end, it was not much different from other legislative sessions in Minnesota: a deal pushed to the last-minute and negotiated behind closed doors.

“This has been the least productive, least transparent session in the history of this state. Minnesotans should be ashamed of the process at the end of the legislative session,” Republican House Minority Leader Kurt Daudt after the midnight deadline passed.

Daudt is no stranger to messy finales.

In 2017 as speaker he reached a handshake agreement with Republicans in the Senate and former DFL Gov. Mark Dayton just before the midnight deadline to adjourn. It required an immediate special session to finish work. Two years earlier, he struck a deal on a budget with Senate DFL Majority Leader Tom Bakk and passed budget bills before adjournment. The only problem: Dayton wasn’t on board and ended up vetoing several of them. That also required a special session to finish things up.

A new crop of leaders in the governor’s office and House this year was part of the reason they were hopeful things would go differently. Daudt and Dayton had an openly combative relationship that deteriorated over the years.

And for the most part, the top three leaders’ relationships still look intact. They were effusive in praise for each other when they announced their deal Sunday. Gazelka said Hortman has “earned her stripes” in her first budget negotiations as speaker. Walz proclaimed them all “still friends,” even though he acknowledged things got “very difficult” at times.

But things still ended with lots of questions and work still on the table. Walz attributed that, at least in part, to divided government. Minnesota has more often than not had split-control at the statehouse, but after the last election, it remained the only divided Legislature still standing in the entire nation.

“We’re still struggling, Democracy is in action, you see that it doesn’t work in D.C. Most places can’t get it done. We did something here that in 2019 is a big deal, divided government with vastly different vision and vastly different budgets that came together in a manner that was respectful,” Walz said. “I agree that the process piece of this, that there are things we need to look at, but the product we’re really proud of.”

For his part, Gazekla said while they missed the early self-imposed deadlines, they were helpful in reaching a deal before the session adjourned.

“But then you come back to the very, very end, where it’s psychology,” he said. “How do you get to the end and how do you ask someone to dare give up something that someone around them might say is terrible?”

The Legislature still needs to finalize bills to cover most of the state’s two-year budget, and the process going forward is unclear.

After the regular session adjourns, public committees turn into more informal working groups, which don’t have any requirements for meeting in public. And it’s not just the budget. Most of the contentious policy proposals debated all year, including gun control, new abortion restrictions and immigrant driver’s licenses, must also be figured out by the time the governor calls legislators back into special session.