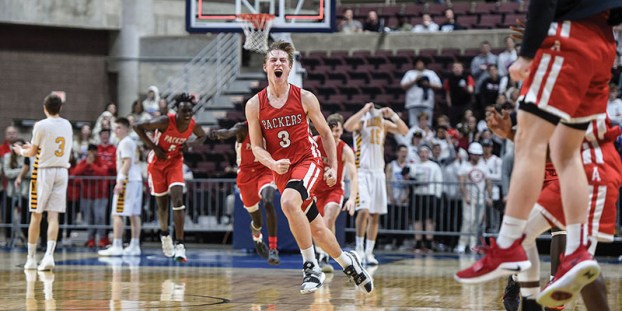 Winning Hand: Packers are headed back to the state tournament

ROCHESTER – When the Packers and Raiders get together in the postseason, all bets are off, but the Austin boys basketball team came through with the top prize as it edged out Northfield 57-54 in the Section 1AAA Title game in Mayo Civic Center Thursday.

The Packers (23-5 overall) were able to hang on down the stretch with their defense to get the win. Medi Obang, who had 14 points, and Agwa Nywesh, who had 15 points, carried the brunt of the scoring load for the Packers, who are headed to their sixth state tournament in the last eight years. 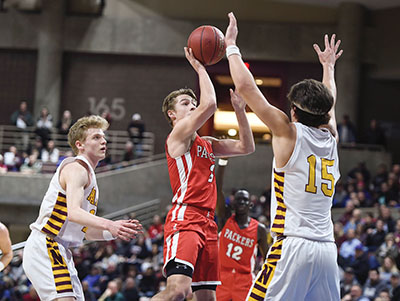 Austin’s Teyghan Hovland with the runner in the lane against Northfield in the first half of the Section 1AAA championship Thursday night in Rochester’s Mayo Civic Center. Eric Johnson/photodesk@austindailyherald.com

“This means everything,” Nywesh said. “We were doing it for ourselves, our teammates, our fans and our whole town. They came out here to support us, so we had to put on a show for them. You’re going to have ups and downs, and it’s how you overcome it.”

Austin has ended Northfield’s season three straight years after the Raiders had beaten Austin 64-61 in overtime in a Section 1AAA semifinal in 2016.

The Packers graduated much of their core from the last two state tournament teams, but the team picked things up with a new crew this season.

“Ball is life for them,” Austin head coach Kris Fadness said. “We’ve got to kick them out of the gym every night so we can go home. They love it and now we get to play at Williams Arena. That’s special.” 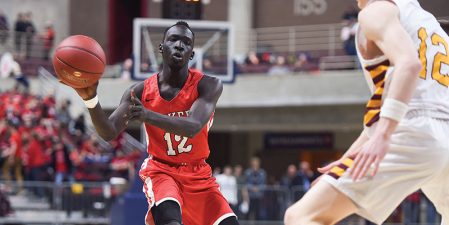 For more on the Packers win:  Locking down a title; Packers rely on defense to earn sixth state tournament berth in eight years

ROCHESTER — Teyghan Hovland may only be a sophomore, but he’s clearly not afraid of the big moment. Hovland did... read more