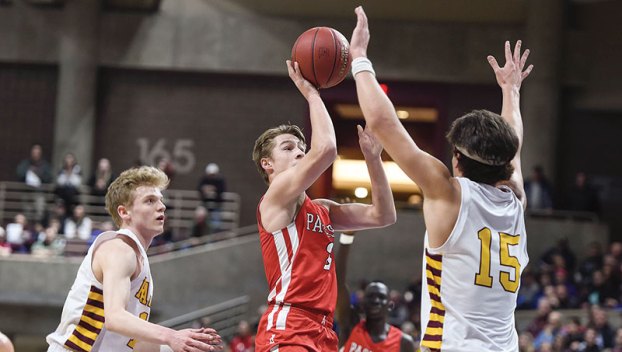 Teyghan Hovland with the runner in the first half.

ROCHESTER — Teyghan Hovland may only be a sophomore, but he’s clearly not afraid of the big moment. Hovland did the dirty work for the Packers as the Austin boys basketball team clinched its third trip to state in a 57-54 win over Northfield in the Section 1AAA championship Thursday in Mayo Civic Center.

Hovland, who finished with nine points and eight rebounds, pulled down a big rebound and hit two key free throws to put the Packers up 56-51 with 1:12 left in the game. He then iced the win when he blocked a three-point shot by Northfield’s Mason Zick with 5.8 seconds left. 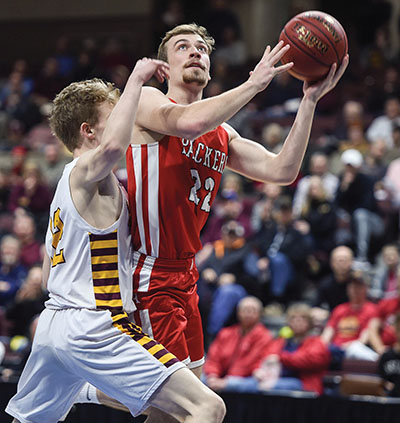 Austin’s Gavin Owens turns to shoot early in the first half against Northfield in the first half of the Section 1AAA championship Thursday night in Rochester’s Mayo Civic Center. Eric Johnson/photodesk@austindailyherald.com

“The ball was swung to him and I kind of jumped to the side to make sure I didn’t hit him,” Hovland said. “I ended up blocking it. I was really nervous, but before the game was just thinking about what I had to do for us to win.”

The Raiders had one more chance after Hovland’s block, but they missed a two-pointer as time expired.

Medi Obang, who finished with 14 points and five steals, hit a deep three to make it to put Austin (23-5 overall) up 45-42 with 7:28 left. Obang was coming off a game where he battled foul trouble and didn’t score against Red Wing on Monday.

“I just looked at film and told myself I can’t be reaching like that,” Obang said. “I just shook it off. I feel like our defense played a really big part in the second half. We were level headed and never took a play off.”

Austin, which missed four free throws down the stretch, never led by more than five in the second half.

Agwa Nywesh, who had 15 points, had a drive to put Austin up 51-49 with 3:22 left and Northfield never tied or took the lead again.

“Defensively we were outstanding,” Austin head coach Kris Fadness said. “With the minutes he gets, Teyghan makes his time count and he’s come a long way defensively. Agwa had a monster second half and with Ngor going down, it was nice to see everyone step up.” 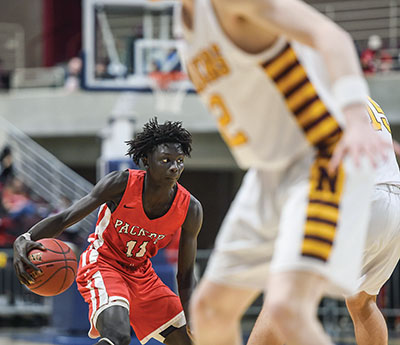 Austin’s Agwa Nywesh on the perimeter, looking inside against Northfield in the first half of the Section 1AAA championship Thursday night in Rochester’s Mayo Civic Center. Eric Johnson/photodesk@austindailyherald.com

The Raiders crashed the boards and controlled the ball to build up a 26-21 lead in the first half. but the Packers closed the frame on a 13-5 burst that saw Obang convert three-point play on a drive and Nywesh hit a deep three-pointer.

The Packers graduated much of their core from the last two state tournament teams, but the team picked things up with a new crew this season.

“Ball is life for them,” Austin head coach Kris Fadness said. “We’ve got to kick them out of the gym every night so we can go home. They love it and now we get to play at Williams Arena. That’s special.” 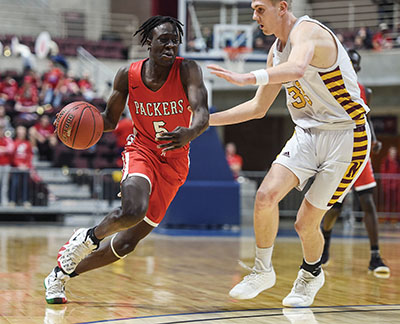 Austin’s Medi Obang on the drive off the perimeter against Northfield in the first half of the Section 1AAA championship Thursday night in Rochester’s Mayo Civic Center. Eric Johnson/photodesk@austindailyherald.com

As water is beginning to rise, the city of Austin and Mower County are keeping their eyes peeled on potential... read more