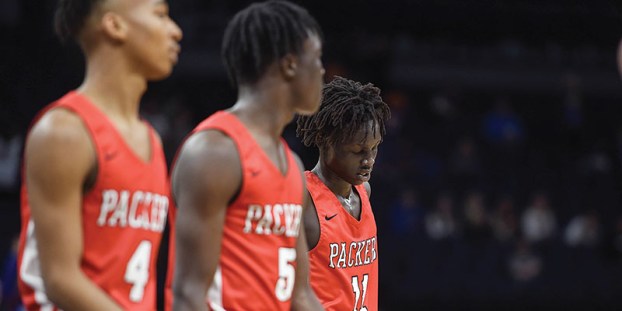 The Austin Packers walk after the floor after the final buzzer, losing to Waseca in the Minnesota Class AAA State Boys Basketball Tournament semifinals at Target Center Thursday. Eric Johnson/photodesk@austindailyherald.com

Just out of reach: Packers lose to Waseca 79-69 in State Tournament semifinals

MINNEAPOLIS — The Austin boys basketball team had its dream of getting back to the state title game come to an end as it lost to Waseca 79-69 in the Minnesota Class AAA State Boys Basketball Tournament semifinals in Target Center Thursday.

The Packers (24-6 overall) were led by senior Medi Obang, who poured in 28 points and grabbed five steals. Obang, who is a two-year varsity player is about 50 points short of 1,000 in his career, which will come to an end when the Packers play Princeton in the third place game at 2 p.m. Saturday at Concordia at 2 p.m.

Austin head coach Kris Fadness said Obang, and all of the team’s seniors stepped up this year. 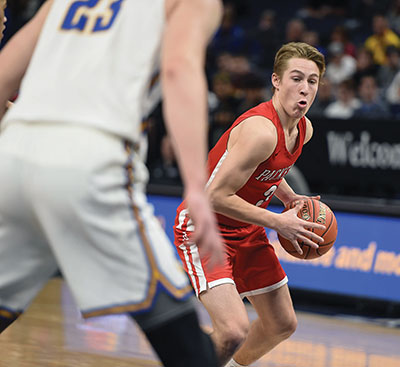 Austin’s Teyghan Hovland with the work inside against Waseca in the second half during the Minnesota Class AAA State Boys Basketball Tournament semifinals at Target Center Thursday. Eric Johnson/photodesk@austindailyherald.com

“Medi Obang had an outstanding career for us. He’s a highly skilled, tough kid,” Fadness said. “LaHenry Gills has been a great spark plug all year, Gavin Owens really stepped up his game in the second half of the year, the Deng twins are outstanding athletes. Ngor played through an injury in the tournament and Dongrin accepted the role of playing inside on defense. Jeremy Flores, Ryan Walters are all outstanding character individuals and they’re great kids. I’m really proud of our seniors.”

The Packers did a lot of work this season to get to their third straight state tournament and their sixth state tournament in the past eight years. Austin had to replace four starters from last year, but it picked up right where it left off.

“For us to be back in this position says a lot about the kids and their passion for basketball,” Fadness said. “We’ve been going for over four months, but for our guys, they live it. It’s a day by day, 365 days a year thing for our guys. I feel great about being with these guys on a daily basis.”

Read more here:  Pack can’t get over the hill: Austin taken down by Waseca in state tourney semifinals

Pack can’t get over the hill: Austin taken down by Waseca in state tourney semifinals

MINNEAPOLIS — Just when it looked the Packers had gotten over the hill, the bottom came out as they lost... read more