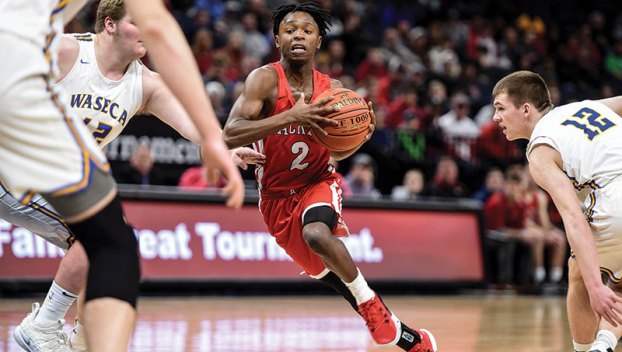 LaHenry Gills drives off the point against Waseca in the first half during the Minnesota Class AAA State Boys Basketball Tournament semifinals at Target Center in 2019. Herald file photo

Pack can’t get over the hill: Austin taken down by Waseca in state tourney semifinals

MINNEAPOLIS — Just when it looked the Packers had gotten over the hill, the bottom came out as they lost to Waseca 79-69 in the Minnesota Class AAA Boys Basketball Tournament semifinals in Target Center Thursday.

After trailing for much of the game, the Packers grabbed a 62-60 lead when Dorgrin Deng knocked down a corner three off a drive from Medi Obang with 4:53 left in the game. Waseca’s Ryan Dufault, who racked up 30 points, responded with a personal 8-0 run over a one-minute spurt to put Waseca (30-1 overall) in control down the stretch. 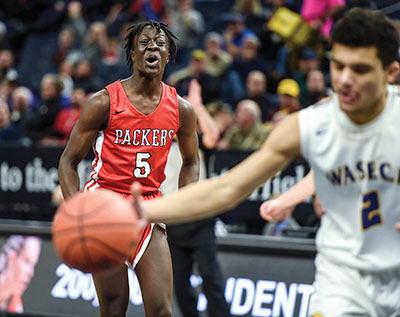 “He’s a great shooter. We just lost him. He had a great game and that’s what he does,” Austin head coach Kris Fadness. “They’re tough to guard, because their starting lineup can all score. They’re good. There’s a reason they’re here. We had some really bad possessions down the stretch and that’s on me. That’s basketball. The team that makes the plays down the stretch usually wins.”

Obang, a senior, hit some huge shots for Austin as he finished with 28 points and five steals, while going 6-for-14 on threes. Obang banked in a deep three to put Austin up 54-53 with 7:40 left and he drilled a big three in the first half to bring Austin within 42-40 with 13:40 left in the game.

“It was really tough (to lose this one),” Obang said. “I really put it all on the court.” 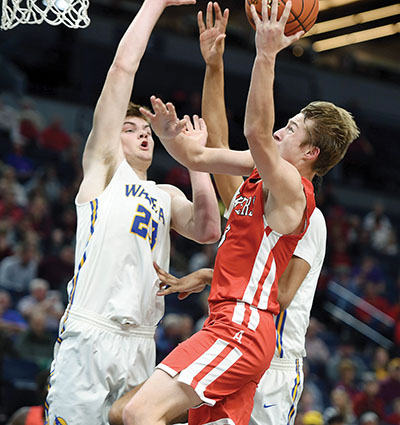 Austin’s Teyghan Hovland with the contested lay-up attempt against Waseca in the first half during the Minnesota Class AAA State Boys Basketball Tournament semifinals at Target Center Thursday. Eric Johnson/photodesk@austindailyherald.com

The Packers (24-6 overall) lost the battle on the boards 39-29, but they did knock down 15 three-pointers, while holding the Bluejays to just five threes, while forcing 19 turnovers. The difference in the game was the Packers, who usually dominate ball control, committed 21 turnovers.

“These guys got sick of me yelling ‘quit turning the ball over,'” Fadness said. “They’re very good, they’re long and a lot of times I thought we got into the gap and they made deflections. But when you have the skill players that we have, I don’t expect us to turn it over at the rate that we did.” 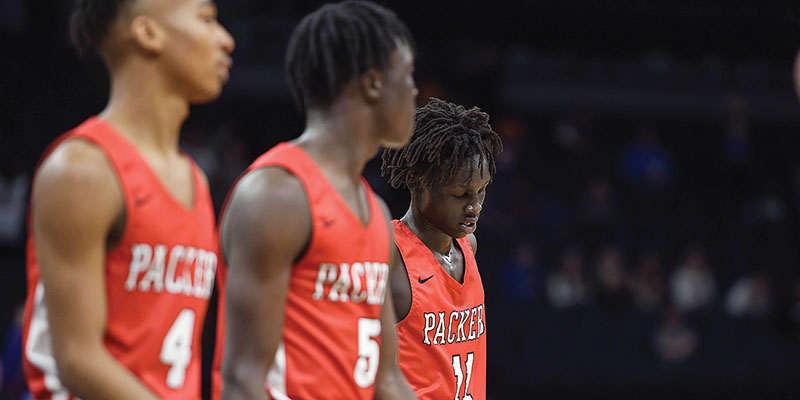 The Austin Packers walk after the floor after the final buzzer, losing to Waseca in the Minnesota Class AAA State Boys Basketball Tournament semifinals at Target Center Thursday. Eric Johnson/photodesk@austindailyherald.com

The Packers trailed for the majority of the first half as Waseca led by as many as six. David Morgan, a 6-foot, 8-inch sophomore, had 15 of his 23 points in the frame. Morgan grabbed 15 rebounds and he had a pair of big blocked shots in the second half.

Austin missed eight of its first 10 shots from behind the arc as the Bluejays jumped out to a 12-6 lead early on.

“Obviously Morgan was a factor,” Fadness said. “He blocked shots at the rim and we couldn’t stop him. He’s a scholarship player and he’s got a bright future ahead of him. He’s a load.”

Agwa Nywesh had 11 points, five rebounds and four steals for Austin, but he and the Packers weren’t able to overcome Waseca’s size advantage.

“They’re a very lengthy team and they sort of affected our passing,” Nywesh said. “It was a factor in the game and we just couldn’t get used to it.”

Austin will play Princeton in the third place game in Concordia University in St. Paul at 2 p.m. Saturday. 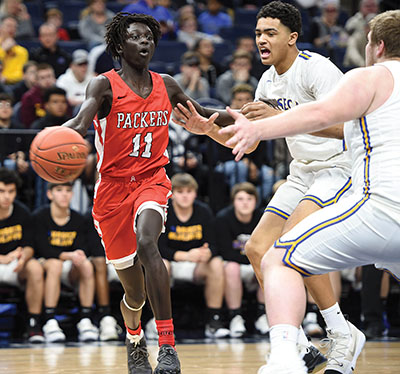 Austin’s Agwa Nywesh with the dish off the baseline against Waseca in the first half during the Minnesota Class AAA State Boys Basketball Tournament semifinals at Target Center Thursday. Eric Johnson/photodesk@austindailyherald.com

Along a stretch of Highway 218, just outside of Blooming Prairie, a colorful and beautiful makeshift memorial of teddy bears,... read more