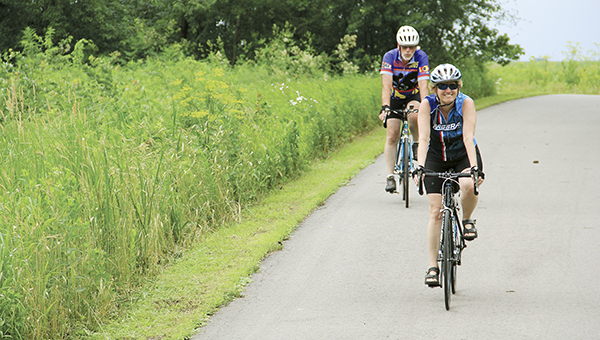 ALBERT LEA — A nearly $1 million federal grant has been awarded for a bridge over Albert Lea Lake to connect Blazing Star Trail from Albert Lea to Hayward.

The $960,000 District 6 Transportation Alternatives Program grant will be available in 2022.

In a letter announcing the grant award, Albert Lea Convention & Visitors Bureau Executive Director Susie Petersen said she hopes the project “will remain on a high priority list for the DNR.”

“It will be included in a proposal for consideration by the Legislative Citizen Commission on Minnesota Resources,” she said.

Scott Haugen of the Minnesota Department of Natural Resources Parks & Trails division reportedly sent 13 letters of support along with the federal funding application.

Sparks spoke highly of the grant.

“That was a good announcement from the DNR, that’s for sure,” he said.

Sparks said he has worked to connect the trail for nearly 20 years, noting a bathroom to accommodate the connection has been built in Hayward. He added the plan comes as Albert Lea remains a Blue Zones Project location.

To Sparks, the completion of the trail would be a “nice feature” and give people another reason to visit Albert Lea.

He said local city and county tax dollars will not be spent on the project.

District 27A Rep. Peggy Bennett, R-Albert Lea, said constituents have told her they want the bridge built, adding the project is high on her priority list.

She said connecting the trail from Albert Lea to Hayward is a responsible use of bonding dollars.

“We should finish what we start,” she said. “Whatever people’s thoughts are on funding it or not funding it, it’s a huge waste of money if we don’t use it.”

Bennett noted she and Sparks plan to author a bill to fund the rest of the project for inclusion in the 2020 bonding bill, but she needs to find out how much the project would cost in 2022 if federal funding is not received sooner.

Petersen said the award “is pretty great news to have.”

She said Myre-Big Island State Park has more than 136,100 visitors a year, and she hopes the Rock ‘n’ Roll bike event will be on the trail. She said it is important to finish in-progress trails.

The Legislature first authorized the existence of the trail in 1996. Funding came in 1998, and it took five years until land deals were done so the trail could be built into the state park. Around the same time, the city of Hayward built a restroom in anticipation of the trail’s extension to the community.

In 2005, the state Legislature authorized $1.47 million in the bonding bill to extend the trail from the state park to Hayward. That funding had a five-year spending deadline, but during the 2010 legislative session, a law passed extending the deadline to June 2014.

The last 1 1/2 miles of trail to Hayward are paved, leaving the construction of a bridge over Albert Lea Lake that connects to the State Park along with about a half a mile of trail remaining.

Once the trail reaches Austin, it would be about 20 miles long.