An accused Freeborn County offender who triggered a two-day search was arrested Sunday at a home in Lyle.

The Mower County Sheriff’s Office arrested Weston William Zuehl after executing a search warrant at a home on the 300 block of Locust Street at approximately 8 p.m., according to the bail enforcement agency Twin Cities Apprehension Team. 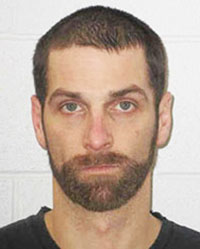 Zuehl had five outstanding warrants in Minnesota, including felony receiving stolen property, felony fleeing a peace officer in a motor vehicle, obstructing the legal process with force or violence and driving after cancellation; and Iowa warrants for felony operation of a motor vehicle while under the influence, eluding police at high speeds in a motor vehicle and narcotics possession.

According to the apprehension team, their office received information Sunday that Zuehl was hiding in a Lyle home. After deeming the tip reliable, the team coordinated with the Mower County Sheriff’s Office and executed the search warrant, according to a press release.

“Zuehl posed a threat to the community based on his history of fleeing in vehicles at high speeds, his alleged use of controlled substances and continuing criminal activity combined with his unpredictable and desperate behavior while on the run,” said Stew Peters, a member of the Twin Cities Apprehension Team. “The Mower County sheriff’s deputies are a group of extremely diligent, dedicated and professional individuals. Their attention to safety and detail is the sole reason that Mr. Zuehl has been secured for prosecution, and we couldn’t be more thankful for their resources and attention to this matter.”

The Freeborn County Sheriff’s Office and Albert Lea Police Department assisted in the search, and the apprehension team followed up on dozens of leads in the Albert Lea area, which included several property searches, surveillance operations and the vetting of phone tips that came into the apprehension team’s office after asking for help in finding Zuehl, according to the release.