A convicted felon was arrested on Tuesday after a shotgun was allegedly found at his residence. 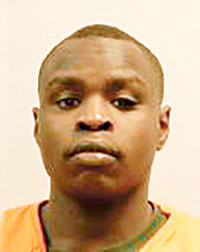 Naney Kwot Omot, 23, of Austin is in Mower County Jail awaiting a possible charge of an ineligible person being in possession of a firearm.

According to Austin Police Chief Brian Krueger, Omot’s roommate called police at 10:46 a.m. on Tuesday expressing concern about a firearm at their residence in the Key Apartment complex. Officers were given permission to search the apartment and allegedly found a 12-gauge shotgun hidden in a tote in a closet.

Omot was later arrested during a traffic stop in the 1400 block of 10th Avenue Northwest. Omot tried to walk away from the scene, but was ordered back at gunpoint, according to Krueger.

A review of Omot’s criminal record shows a prior felony conviction for second-degree burglary.