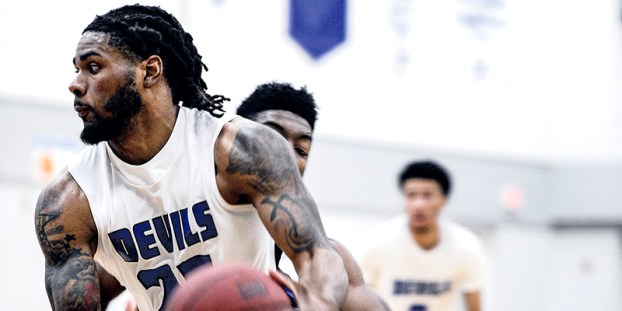 Riverland’s Robert Parker cuts to the hoop during the first half against Ridgewater Wednesday night at RCC. Eric Johnson/photodesk@austindailyherald.com

Men’s basketball: RCC’s Parker continues comeback on and off the court

Riverland sophomore Rob Parker has had to take the long road back to the court, but it’s paying dividends big time this season. Parker was at it again as he made some big plays down the stretch in a 78-66 win over Ridgewater (3-12 overall, 0-5 MCAC) in RCC Gym Wednesday.

Parker, who finished with 23 points, eight rebounds and two blocks, hit some late free throws and he knocked down a three-pointer to put RCC up 71-62 and ice the game. But it’s the strides that he’s made in the classroom that have made Parker, a native of Bloomington, Minn., the proudest. “I’m living life right now. This is what I’ve been praying for and it’s ll I’ve ever wanted,” Parker said. “It took a lot of determination and a lot of hard work. I had to put in time with school and get my grades right. I just had to keep with the plan.”

RCC head coach Derek Hahn said it’s been great to have Parker back on the court and it was equally great to see the forward mature and work his way back onto the team after a two-year hiatus.

“It’s been a long journey for him and us. We knew what he was capable of after his freshman season,” Hahn said. “The classroom wasn’t something that he shined in right away, but he’s come a long way with his maturity and he’s going to be a good fit for whatever four year school takes a chance on him. He defends, he can rebound and he can shoot. I was glad this fall to see him with one of the highest GPA’s on the team. It’s nice to see guys take this full circle and focus on more than just the basketball part.”

Woodbury grad Jace Klinkner finished with 26 points, seven rebounds and three assists. He said the first half was a little frustrating as the Blue Devils (12-6 overall, 3-2 MCAC) trailed by as many as seven points, but he had faith in the team to comeback.

“It was frustrating, but we pulled through. We just had to get everybody together,” Klinkner said. “I love playing with Rob. Nobody can stop him inside.” GRAND MEADOW — Grand Meadow has had a lot of success on the football field over the past six years... read more