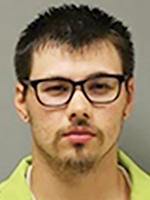 An Albert Lea man was charged with a felony Friday in Freeborn County District Court after allegedly abusing a 19-month-old boy early in the week.

Damian Wade Haugen, 23, is charged with felony malicious punishment of a child under 4 years old.

Court documents state Haugen was charged after an Albert Lea Police Department detective was dispatched Monday to a residence in Albert Lea on a report that a 19-month old boy — the child of a woman Haugen lived with — had come to day care with red marks on the right and left side of his face. The marks were reportedly believed to have come from a hand that possibly grabbed the toddler’s face.

In an interview with the child’s mother, she said Sunday was the first time Haugen had been left alone with her children, court documents state.

She reportedly said Haugen sent her a picture of an injury on the right side of the alleged victim’s face. He allegedly said another child at the residence caused the injury, and he said later in the day that he had suffered an injury on the left side of his face. There were reportedly three children at the home during the incident.

Court documents state the woman found two kitchen utensils, a spatula and a pasta spatula after she got home, noting she thought it was strange because the children would not have been able to reach the utensils. She said the children had never been violent to the boy prior to the incident.

Court documents state Haugen denied abusing the boy. He said spatulas that were found under a crib in a bedroom must have been retrieved from the sink by one of the children.

Felony malicious punishment of a child carries a maximum sentence of five years in prison and a $10,000 fine.