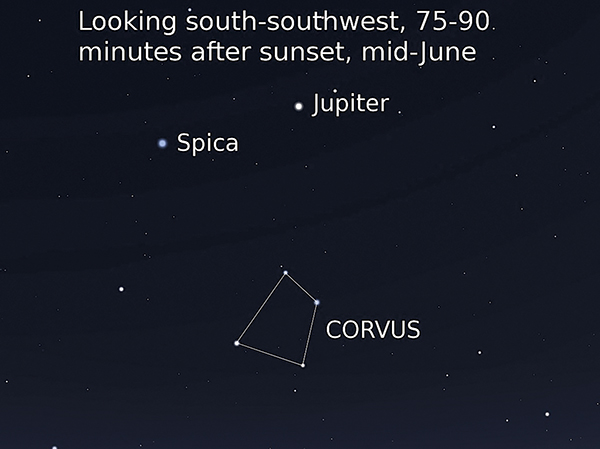 After nightfall this month, we can compare two giants: Saturn and Jupiter. Jupiter comes out as a beacon in the southwest and sets in the west a few hours later. Trailing it is Spica, the brightest star in Virgo. Below Spica and Jupiter is the skewed, four-sided form of Corvus, the crow.

Saturn rises in the east around sunset and travels the night sky between Scorpius and its red heart, Antares, to the west and the Teapot of Sagittarius to the east. On June 15, Earth laps the ringed planet in the orbital race and it will be at its brightest for the year.

At this time — called opposition because it places the planet directly opposite the sun in the sky — Saturn will be up all night. And while it will be brighter than usual, the change in brightness isn’t nearly as dramatic as the change when Mars gets near opposition. That’s because Saturn, as well as Jupiter, are so far away that their distance from us changes relatively little as Earth orbits the sun. But when our orbit makes us lap Mars, we get so close that the red planet lights up like a ruby in the sun.

After the 15th, Earth leaves behind not only Saturn, but the spectacularly successful Cassini mission to the ringed planet. The Cassini spacecraft has begun a series of weekly dives between the planet and its rings and is sending back stunning photos. In September Cassini will plunge into Saturn, a final journey that will end with the spacecraft burning up like a meteor.

Above Saturn and Jupiter, brilliant Arcturus anchors the kite-shaped constellation Bootes, the herdsman. Just east of high-flying Bootes hangs Corona Borealis, the northern crown, with its brightest star, Gemma, near the lowest point. Gemma is also known as Alphecca, from the Arabic for a bright star in a broken ring of stars.

In the morning sky, Venus shines brightly low in the east. A waning crescent moon visits on the 20th and 21st.

June’s “strawberry moon” becomes full on the 9th at 8:10 a.m., but by then it will have set. To be sure of catching it, go out the night before or by 5 a.m. the morning of the 9th. This is the most distant full moon of the year, coming less than a day after the moon reaches apogee, the farthest point from Earth in its orbit. The night of the 9th-10th, the moon and Saturn cross the sky together.

Summer arrives at 11:24 p.m. on Tuesday, the 20th, when the sun reaches a point over the Tropic of Cancer. At that moment, Earth will be lighted from the Antarctic Circle up to and past the North Pole, all the way to the Arctic Circle on the night side of the planet.

The University of Minnesota offers public viewings of the night sky at its Duluth and Twin Cities campuses.