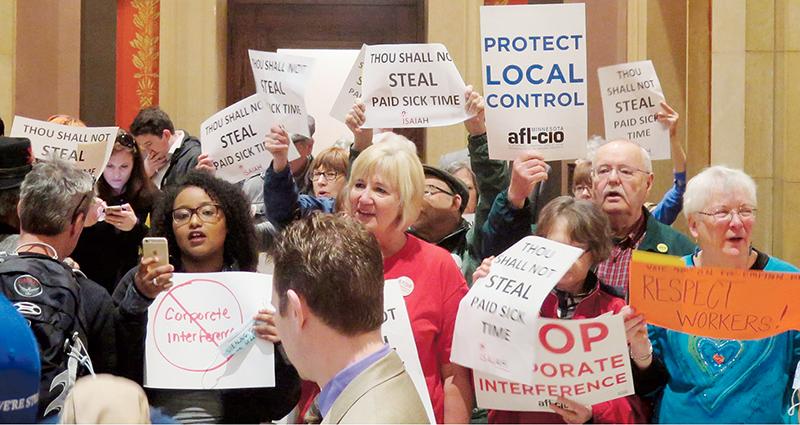 Protesters waved signs and chanted outside the Senate chamber before lawmakers debated a bill on local labor regulations on April 20, 2017 in St. Paul. Brian Bakst/MPR News

City officials around Minnesota are upset by several bills advancing in the Legislature that they say would undercut local decision making.

Among them are a pair of measures the Senate passed last week that would roll back efforts by Minneapolis and St. Paul to raise the minimum wage and guarantee paid sick time. But concerns extend beyond those two bills, and those two cities.

“We’re just seeing that legislators are really scrutinizing what the local units of government are doing,” said Anne Finn, assistant intergovernmental relations director at the League of Minnesota Cities.

The group has tallied more than 30 pieces of legislation introduced this year that would restrict municipal authority. Some are high profile, like the bills that would block Minneapolis and St. Paul minimum wage proposals and paid sick time ordinances. Others are more obscure, including proposals that would allow voters to challenge local government levies and certain fees they charge utilities.

In Duluth, a citizen group has worked for several months to build support for a local plastic bag ban. But Jamie Harvie, coordinator of the Bag It Duluth campaign, worries the effort could be thwarted by state lawmakers before an ordinance is even introduced at the Duluth City Council.

“Legislation comes in at the statewide level, saying, all these conversations, all the networking, all the education that’s being done, is meaningless. It strikes at the heart of our whole democratic system,” Harvie said.

The decision to use plastic bags should be up to individuals, say critics of efforts like the one in Duluth.

“A city by city approach with bans and fees is not the answer for Minnesotans, quite frankly,” said Sen. Bill Ingebrigtsen, R-Alexandria, who has sponsored a bill to prohibit governments from banning or taxing plastic bags. “There is a time and place when I think the state has to step up, instead of having all these hodgepodge regulations throughout the state of Minnesota.”

The League of Cities’ Anne Finn says while these so-called preemption bills are nothing new, this session has brought more than in the past. And she says the bills aren’t just Republican efforts to stop efforts in big liberal cities. She says most have Democratic co-sponsors.

“Both parties are guilty of this, kind of trying to interfere,” she said, noting that most preemption bills have DFL co-sponsors.

Finn says cities are laboratories of democracy that act on issues when states or the federal government don’t. She cites a state law passed 10 years ago to ban smoking in public places, a move that started at the local level. “It may not have happened if individual city councils hadn’t stepped up and tried to figure out how to implement these bans,” she said.

Minneapolis is one of 39 cities across the state to pass a resolution of support for local decision making.

Supporters say without such laws, businesses would have to cope with an unwieldy patchwork of regulations.

Gov. Mark Dayton has said he doesn’t support superseding local authority, but he says he’ll wait to see final bills before deciding how to vote on them.