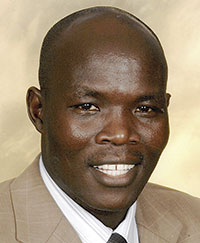 He was born March 1, 1974, in South Sudan, Africa, the son of Ajulu and Adapa (Metho) Gilo. Nygare lived in Gambela, Ethiopia, and then came to the United States in 1994. He settled first in California and moved to Worthington, Minnesota, for work. On May 26, 2007, Nygare married Apiew Wiet in Ethiopia. Apiew came to the United States in 2010. Since 2010, Nygare was the lay pastor for the Anyuak Faith Community at Our Saviors Lutheran Church in Austin. During this time, he entered the TEEM Program at Pacific Lutheran Theological Seminary in Berkeley, California. Nygare recently completed all degree requirements for ordination with the Evangelical Lutheran Church in America. He was a spokesperson for South Sudan Ministries in the SE Minnesota Synod, and was a leader among the Anyuak Faith Community in the U.S. Nygare received many awards and certificates annually for his service through the church. He will be dearly missed by his family, his friends, and his faith community.

Next week we will gather to grieve and to celebrate his life. We will gather to surround his family with our love and support. The viewing will take place from noon to 8 p.m. on Friday, April 28, at Our Savior’s Lutheran Church in Austin. There will be a prayer service 10 to 11:15 a.m. at Our Savior’s, followed by burial at 11:30 a.m. at Oakwood Cemetery. A memorial service will begin at 1 p.m. at the church.

As a way of blessing the future for his loved ones and community and in honor of the life and service of Nygare Gilo, lay pastor to the Anyuak Faith Community and Our Savior’s, we have set up a memorial fund in his name. Financial gifts can be directed to Our Savior’s Lutheran Church, 1600 West Oakland Ave., Austin, MN 55912. Memorial funds will be used for funeral expenses,` family support for his wife Apiew Gilo and their seven children, and for the Anyuak ministry both here in Austin and in Gambela, Ethiopia. May these gifts extend the blessings that Nygare has poured out into us and the world. Questions can be directed to the Rev. Dr. Chad Johnson at cjohnson@oursaviorsaustin.org or 507-437-4516. In giving this gift to Our Savior’s, it will be recorded on your yearly giving record for charitable contributions.