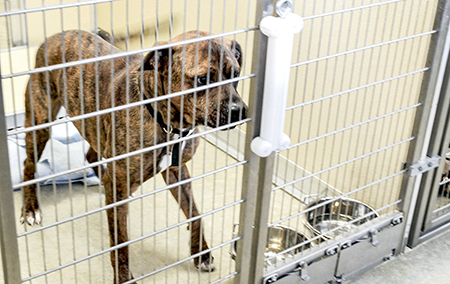 Louis was one of two dogs taken by police from an abusive home situation. Louis may have some mastiff breed in him.

The Mower County Humane Society is proud to be a part of the no kill nation.

Our volunteers firmly believe that no cat or dog enters the shelter with an expiration date. Some animals find homes very quickly. For others, it can take quite a bit of time. During this season of new beginnings, two of our longterm residents were given their fresh starts.

Louis was one of two dogs seized by law enforcement in October 2015. He and another dog had been locked in a garage, basically starving. Louis was in terrible shape and weighed about 40 pounds at the time.

Louis found his match on the first of April. He was adopted by a young man and is doing great. He goes to doggie daycare a few days a week and is even receiving professional training. At the time of his adoption, he weighed 70 pounds. His transformation was remarkable and MCHS volunteers are proud to have been a part of it.

Our Mazey entered the shelter in September of 2009. She was a very timid and fearful dog. Normal things that most dogs love were completely alien to her. She was terrified to take a walk or ride in the car. It took extreme patience and baby steps to help her overcome her fears. Her every accomplishment was applauded.

Mazey recently received her happy ending after seven and a half long years. A couple that had adopted many shy dogs from the shelter in the past took her home. Saying goodbye was difficult, but MCHS volunteers know that she is in wonderful, patient, and loving hands.

Yes, Mazey’s stay at the shelter was quite extended. Some might think it cruel. However, she was loved and nurtured for all of those years. No expiration date for any of them. Only love, patience and time.

The Austin Veterinary Clinic will be holding a reduced cost vaccination clinic on from 9 to 11 a.m. on April 29. Rabies and distemper vaccinations and heartworm testing will be offered at a reduced price. No appointment is necessary. Please call Austin Vet at 433-5225 or 433-1261 for more information.