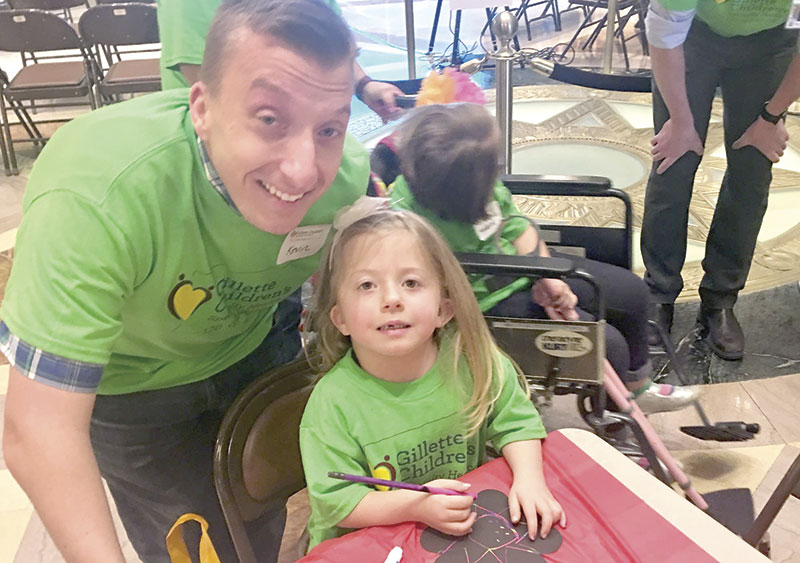 Kevin Youngquist and his daughter Hope, 7, at Gillette Children’s Hospital 120th anniversary rally in the Capitol’s rotunda on Tuesday. Youngquist has Multiple Pterygium Syndrome and was a patient at Gillette in the 1980s. Hope is one of Youngquist’s two children currently under care at the hospital for the same condition. Emma Sapong/MPR News

For more than a century, Minnesota has led the nation in providing medical care to children with complex medical conditions.

And the St. Paul-based hospital that pioneered that specialty marked its 120th anniversary at the state Capitol Tuesday.

Doctors, patients and families gathered in the Capitol’s rotunda for a “Gillette Day” rally.

“Our theme today is 120 years of can. Gillette has always been focused on what our children can do rather than their disabilities,” he said.

The hospital treats 25,000 patients each year with muscular, skeletal or neurological conditions.

Generations of patients came to celebrate. Kevin Youngquist was born with a rare condition called Escobar Syndrome. He was a patient at Gillette Hospital in the 1980s and ‘90s.

He attended the rally with his 7-year-old daughter Hope — one of his two children who have the condition. They are currently under care at the hospital.

Youngquist said the quality of care has evolved to include more emotional support.

“These things that they go through at this phase of their life can be pretty scary. But because of the care and love that those physicians provide, my daughter isn’t scared of the surgeries,” he said. “She has a rod in her back so she has to go in for regular adjustments, and they’re outpatient or inpatient procedures. Because of all the thought that goes into the care, it doesn’t faze her.”