Star Watch: A renewal in the skies

April brings renewal to the stars and planets of the morning and evening skies.

Jupiter, long a morning planet, comes into its own in the evening sky. On the seventh, Earth glides between the giant planet and the sun, an event called opposition because it places Jupiter opposite the sun. On that day Jupiter rises in the east at sunset and sets in the west around sunrise. In between, it travels the night sky in company with Spica, the brightest star in Virgo. Spica, however, is no match for the beacon that is Jupiter. 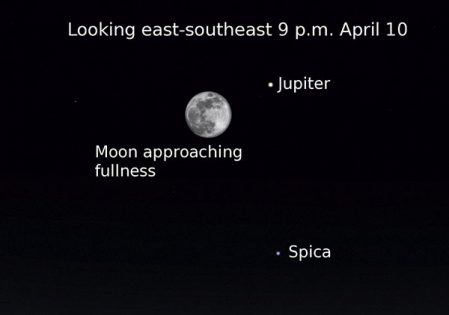 On the 10th, the full moon follows Jupiter on its nighttime journey. The moment of fullness comes at 1:08 a.m. on the 11th, when the moon, Jupiter and Spica will be near their highest point in the south. Many Algonquin Indians knew this moon as the full pink moon, for the flowering of grass pink or wild ground phlox at this time of year. Other names included the sprouting grass moon and the egg moon.

Venus, a fixture above the sunset horizon all winter, fell into the sunset in March and is reborn this month as a morning star. As it climbs steadily in the east, our sister planet moves farther away from Earth, gearing up for its next trip behind the sun. Look for it late in the month, around 40 minutes before sunrise. On the 23rd, an old crescent moon appears with the planet.

Saturn also shines in the predawn hour, low in the south, just to the left of the red star Antares in Scorpius.

The real star of April is Leo, the lion, which reaches its highest point during the prime evening viewing hours this month. You’ll find it in the south, prancing westward with the night. The lion’s head is outlined by the famous Sickle of stars, anchored by Regulus, Leo’s brightest star. Just to the east is a triangle of stars marking the hindquarters and tail. At the eastern point of that triangle is Denebola, from the Arabic for “tail of the lion.”

But there’s a bigger triangle to be formed using stars of Leo. To see the “spring triangle,” first find the Big Dipper; in April it hangs upside down, high in the north, in the mid-evening hours. Next, follow the curve of its handle and “arc to Arcturus,” the brilliant star in the east. Then “speed on to Spica” by extending the curve again, being careful not to confuse Spica with Jupiter. As for the third star, you can make a nearly isosceles triangle by adding Regulus, or a more equilateral one by adding Denebola instead. Take your pick.

The Lyrid meteor shower is expected to peak in the predawn hours of the 22nd or 23rd, bringing 10 to 20 meteors per hour. Comet Thatcher left behind the dust that burns up in Earth’s atmosphere to generate these meteors. It last visited our part of the solar system in 1861, and it’s not expected back with a new shipment of meteoric dust until 2276.

Twin Cities, Minnesota Institute for Astrophysics: www.astro.umn.edu/outreach/pubnight Check out the astronomy programs at the University of Minnesota’s Bell Museum ExploraDome: http://www.bellmuseum.umn.edu/exploradome Find U of M astronomers and links to the world of astronomy at www.astro.umn.edu.

Comedy show set for the funniest day of the year

Comedian Jeff Pfoser is the headliner for Jokes On Us: April Fool’s Comedy Showcase at the Historic Paramount Theatre  at... read more