For someone who doesn’t cry very much, Brian Staska admitted early on at the “Putting the Axe on Cancer” benefit for him and his family that he may have a hard time holding back.

Seven hundred to more than 1,000 people came together at the Mower County Fairgrounds Saturday for a benefit for Staska, his wife, Wanda, and their three daughters: Brooke, 16, Kaitlyn, 14, and Maddie, 10.

“I’m honestly overwhelmed,” Staska said. “You know, I’ve spent my whole life doing stuff for other people, and it’s an uncomfortable position to be in when everybody’s doing stuff for you, and especially at this level.”

“This is just amazing,” he added.

Staska is a part-time firefighter and firefighting instructor at Riverland Community College. He’s battling Mucinous Adenocarcinoma, a rare type of stage four cancer that originated in the appendix and spread throughout his abdomen

On Aug. 3, Staska had surgery to remove his cancer; however, doctors started the operation and determined he had a high-grade cancer and closed him up.

After waiting six weeks to heal, he started on a chemotherapy and has another round on Monday. He’s still undergoing the treatments, which he said are 48 hours long and intended to control the cancer and keep it from spreading.

It’s about four hours in the clinic before he takes a pump home that pumps for another 40-plus hours. 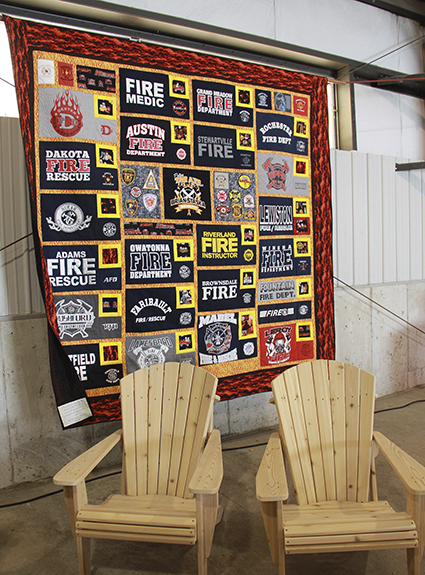 Brians mom, Jeralene Staska, made a quilt and his brother made two wooden chairs for the auction.

But Staska’s friends and co-workers have stepped up to help and planned Saturday’s benefit for several months. The Austin and Brownsdale fire departments organized the benefit for Staska.

Austin Fire Department Shift Commander Terry Petersen said the Austin and Brownsdale departments reached out to the many regional departments Staska has worked with to seek donations and support of any kind. Hy-Vee and Mrs. Gerry’s also contributed to the event, as did some beer contributors and many others.

“Everybody called in and said, ‘Hey, how can we help,’” Petersen said.

When he heard about the benefit, Staska admits his first thought was, “Why me?” And he asked himself if he really needed such a benefit, but then people started telling him he’s always been there for others so this was their way of thanking him.

“It started to kind of make sense,” Staska said. “I’ll tell you what, if you’ve never been in this position, it’s hard. And it’s very humbling. It’s super, super humbling.”

Staska teaches specialized firefighter courses and the Firefighter 1 and 2, EMS and Hazmat programs for people to get certified.

Petersen described Staska’s reach in his program as one of the largest in the state, as it covers north up to the southern suburbs of the Twin Cites, over to the Mississippi River and south into northern Iowa.

He is also an instructor for 21st Century Auto Extrication and teaches throughout the state.

“He knows a lot of people,” Petersen said.

Saturday’s benefit featured a live auction with 40 to 50 items, a silent auction with close to 250 items, a bake sale, a meal, gun raffles, 50-50 drawings, a concert by Cloud Cult and more. Staska was thankful for all the support he and his family have received. Staska was also thrilled that his sister, Connie Minowa, his brother-in-law, Craig, and their band Cloud Cult wanted to play at the benefit. His brother made wood chairs that were auctioned off, and his mother, Jeralene Staska, made a quilt.

Petersen was pleased that the quilt went to Staska and his family, thanks for donations from Dakota Fire Department Relief Association, Fire Safety U.S.A, and many other organizations, departments and individuals.

Petersen thanked everyone who helped, all the departments who contributed and everyone who attended or participated in some way in making the benefit a success. Fundraising totals were being tabulated on Monday.

Austin Fire Chief Jim McCoy was impressed to look around at all the items and time given to the event, and he thanked everyone for their help.

“It’s amazing that everybody steps up in times of need like this,”  McCoy said.

“The community’s incredible,” he added. “It’s really touching what people step up and do.”

Along with raising money, Petersen hoped the event would just serve as a time to bring people together for a good cause, and he was pleased to see that even the setup on Saturday went quickly because of all the people involved.

“That’s what the fire departments do: They just come together and help out people,” Petersen said.

While his cancer is a rare form, Staska said he’s learned through support groups that it’s not as rare as people think. He thanked everyone for their support and urged people to keep supporting similar causes.

“Cancer sucks,” Staska said. “It’s a horrible, horrible disease, and I just hope people keep supporting anytime you can support something like this. It helps. I’ve got limited time left, but hopefully we keep pursuing a cure and come closer to that for everybody.”

Seven people were cited for underage drinking and one person was cited for a social host ordinance violation after police... read more