A warrant has been issued for a Fairmont man who reportedly severed his ankle bracelet Friday shortly after being released for medical treatment. 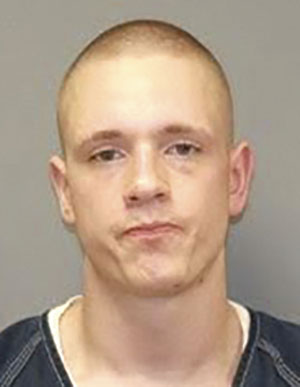 Levi Troy Dahl, 21, is facing two counts of fleeing a peace officer in a motor vehicle and one count of reckless driving in a chase that reportedly reached speeds of more than 60 mph earlier this month in Albert Lea. He pleaded not guilty to those charges on Thursday in Freeborn County District Court.

Court documents state an Albert Lea police officer was heading east on Fountain Street Sept. 6 while on patrol when he noticed the driver of a Chevy Malibu matched the description of a suspect in a Faribault County burglary during which guns had been stolen.

After Dahl did not stop the vehicle after an officer activated his emergency lights, the chase accelerated when the Chevy turned south on Newton Avenue and drove through two stop signs on Newton without slowing down, court documents state.

The vehicle crossed the intersection of Newton Avenue and Main Street against a red light, and “swerved dramatically to avoid a collision with a van in the intersection,” court documents state.

The Chevy then reportedly collided with a vehicle parked facing north on the opposite side of the road, causing both vehicles to go over the curb, the sidewalk and into a municipal parking lot, causing front-end damage.

After being transported to the hospital, Dahl told the officer he “was running from the officer to avoid going to jail,” court documents state

The chase Dahl was allegedly involved in ended in a crash near the Freeborn County Government Center.

Dahl was released Friday morning for surgery on a broken leg in Rochester. He was ordered to abide by GPS monitoring, house arrest and daily reporting as monitored by court services.

Dahl reportedly left Mayo Clinic before surgery was completed. The GPS bracelet was found cut at a Rochester Walmart.

The Freeborn County Sheriff’s Office is actively looking for Dahl. His current location is unknown.

Anyone with information on his location is advised to call the Freeborn County Sheriff’s Office at 507-377-5200, extension 5.