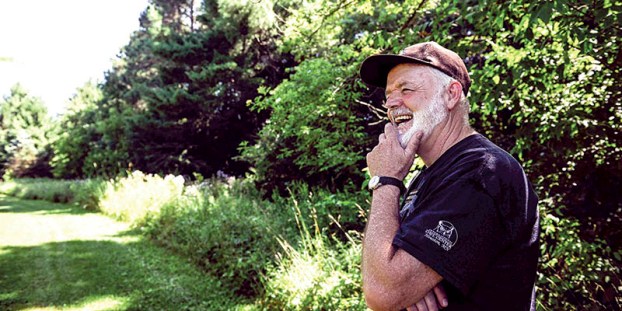 Larry Dolphin, Jay C. Hormel Nature Center naturalist, takes a moment to reflect on some of the things he’s experienced while on the job at the center. Herald file photo

Wishing a legend well on his retirement

As we approached the Jay C. Hormel Nature Center’s interpretive center, a squirrel darted across the trail in front of us and I shouted out.

The other children and Director/Naturalist Larry Dolphin turned, but it wasn’t in time to spot the little critter. I was the only one who saw it — the only animal spotted on the field trip.

I’m far from the only person with fond memories of field trips where Larry led us through various aspects of the nature center, but I’ve gotten the chance to work with Larry through the Herald.

As Park & Rec Director Kim Underwood recently told me in an interview: There’s just something about Larry. He’s passionate and knowledgeable about the center and the environment, and he’s a bit of a character — that’s a compliment. And Larry is someone — to put journalistic impartiality aside — who is easy to respect and like.

Now it’s time for a bit of honesty: Larry has taken on a legendary status at the Herald. He and I hold the record for longest known interview for a Herald story, which was published in our 2015 Progress edition. It clocked in at just over two hours, at which time I had another appointment.

Let me give you some perspective: The average interview for a feature story lasts about 20 minutes. I asked Larry for background on his education. When I looked down a little while later at my voice recorder, more than 20 minutes had passed.

Yes, Larry is a talker, but we love him for that at the Herald, even if we joke that we have to block off some time when we call him.

Part of that talkativeness is just his personality and part is his passion and knowledge for the job.

Over covering countless stories on Larry and the nature center, it’s easy to see Larry lives and breathes the nature center and a passion for the environment. But that was never more prevalent than when Eric and I took our roughly hour-long hike with Larry for the Austin Living piece.

We met Larry as he was working with a group of kids readying for the annual Summer Adventure Program trip, and we listened as Larry instructed them on how to enter and exit canoes.

Once the kids were off, Larry, Eric and I started walking toward the tower, where we planned to get photos — which ended up being the cover for the September-October Austin Living — before hiking back.

As we walked, we talked — it was part interview and part just chitchat, as Larry pointed out birds he heard singing, monarch butterflies and they floated past, and more.

Another butterfly even landed on Eric’s camera bag and hitched a ride for more than 15 minutes.

Our hike with Larry caught me at a stressful time as my mom was scheduled for surgery a few days later — she’s home and healing now. But something about being out in nature and chatting with Eric and Larry made the stress melt away.

After a while, it didn’t even feel like work. I didn’t really want to go back and sit in the office in front of a computer. It was more fun to have Larry point out birds and insects and plants during our hike.

After more than 28 years in the nature center, Larry will be missed by the countless people he’s worked with over the years, but we wish him well on his much-deserved retirement.

A strange turn of events: Pizza order leads to woman accused in series of fraud cases