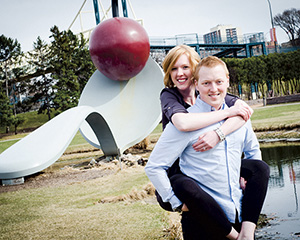 Elissa Goskeson and Eric Volkman both of Albert Lea, Minnesota have announced their engagement.

Elissa is the daughter of Cynthia and Steven Goskeson and the granddaughter of George and Deloris Goskeson of Albert Lea and Ronald and the late Esther Lokken of Baton Rouge, Louisanna. She was home educated through 2008 and graduated from the University of Minnesota in 2013 with a Masters in Education degree in Sport Management. She is currently employed with General Mills Inc.

The couple have set a Sept. 24, 2016 date for their wedding in Minneapolis, Minnesota. They will reside in Plymouth, Minnesota following the wedding.

The Gear Daddies perform in front of the grandstands Friday night at the Mower County Fair. Eric Johnson/photodesk@austindailyherald.com The Mower... read more