Cars a big part of the Hormels

Antique cars that belonged to Hormel family members have been on my mind recently due to photos, newspaper articles, and inquiries from the public. 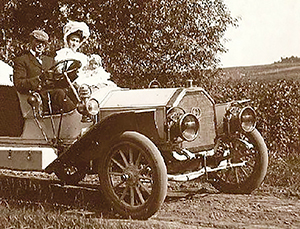 Ben Hormel and family pictured in his car.
Photo provided

According to John Haymond, Mower County Historical Society, there were only 35 automobiles in 1909 in Austin. George and Jay Hormel were named as two automobile owners in that survey, of a White Steamer and a Buick, respectively.

The HHH has a photo on display of Lillian Hormel driving that Steamer. The first White Steamer car was developed by Rollin White in Cleveland, Ohio, in 1900 and was offered to the public in 1901. The Hormels were in good company as president William Howard Taft also owned a White Steamer.

Another mention of a Hormel car occurred in the May 6, 1910, Austin Daily Herald.  “Mrs. Fred Gleason (Lillian’s Sister) accompanied Mrs. George Hormel to Fairbault today in the Hormel’s new Welch car.”  This make of vehicle was produced by the brothers Welch in Michigan and became part of the General Motors Corporation in 1910.

My neighbor recently showed me the hood ornament from a Peerless car dating to the late 1920’s. The story in his family is that it came from a car allegedly belonging to a Hormel family member. I have not found any record of the Hormels owning a Peerless, but, based on their appreciation of fine cars, it is quite possible they did. Peerless was known for building high-quality, luxury automobiles in Cleveland, Ohio from 1900 until 1931.

Ben F. Hormel owned a Buick and apparently had an accident in October, 1908, as recorded in the Herald.

“One of the front wheels of Ben Hormel’s new Buick automobile was demolished this noon in an accident that occurred at the corner of Water and Ash streets (now 4th Ave. NE and 7th St. NE).

“Ben Hormel was driving the car at the time on his way home to dinner. When he started to turn the corner from Ash Street to Water Street a friend of his called out, ‘How fast is she going Ben?’ When he turned his head to answer, the machine had gained the center of the pavement which had just been freshly sprinkled. The front wheels began to skid and before he could gain control of the machine it crashed into a curb. All the spokes were broken out of the wheel and the rim was ruined for further use. Mr. Hormel said that he was not going faster than usual and, had it not been that his attention was diverted just as the machine struck the wet pavement, the accident would not have occurred.”

Many makes and models of cars were driven by the various Hormels in Austin.  I wonder how many types of horse and buggy they owned prior to the introduction of the car.

Buggy Rides and Parlor Visits, A History of Courting presented by Jaimie Timm of the Mower County Historical Society. Tying into the new exhibit at the MCHS, Jaimie will describe the common day rituals and traditions of dating in the early 1900’s. This enjoyable topic will surely stir up memories and conversations.

Slow-cook your way to good nutrition

By Courtney Kremer Hy-vee Dietitian Want to solve the how-to-get-dinner-on-the-table dilemma as you start back to the routine of school?... read more