Finding a way to heal; Kyle Snyder looking for answers about his autoimmune diseases 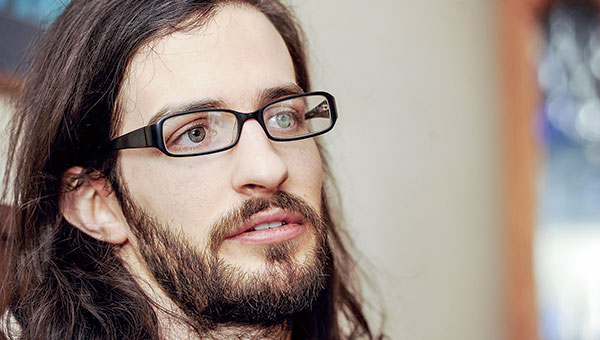 Kyle Snyder recounts his health problems while in Taiwan that led to an autoimmune disorder and his continued battle.

It came like a bolt out of the blue, according to Kyle Snyder.

Snyder was standing in line at the neighborhood McDonald’s, ready to order some food for he and his girlfriend. Just as he walked up to the counter, his world changed.

His body tightened. His heart felt like someone was squeezing it. He collapsed on the ground.

Snyder, a seemingly healthy 23-year-old student teaching English in Taiwan, had a heart attack at McDonald’s.

“It’s pretty cliche, looking back at it,” he said with a laugh.

Though Snyder can chuckle about it now, what he didn’t know was that episode would change his life forever.

For the better part of three years, Snyder, now 26, has dealt with various autoimmune diseases. The Austin native spent more than seven months in and out of the hospital in Taiwan before he moved back to Minnesota, and even now doctors can’t quite figure out everything that ails him. 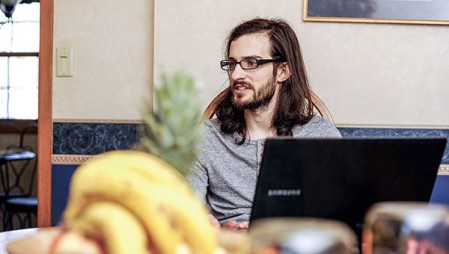 “Everything that’s affecting me is holistic, which makes sense given the fact that
holistic medicine seems to be the only thing that’s helping.” — Kyle Snyder

He gets sick easily from eating the wrong kind of food. He has trouble digesting certain nutrients. Snyder still has heart episodes at times, though not as bad as when he was in Taiwan. He suffers from extreme fatigue, has had several ulcers and hernias, and experiences pain throughout his body. He even has difficulty breathing at times.

The Austin native is still looking for answers, only he’s using an alternative means to do so.

“Everything that’s affecting me is holistic, which makes sense given the fact that holistic medicine seems to be the only thing that’s helping,” he said.

Snyder was a promising English teacher who studied Chinese politics and economics abroad. A graduate of Minnesota State University, Mankato, Snyder planned to get his master’s degree in Taiwan and even became certified to teach English through Oxford University.

Yet his dreams took a backseat to his health concerns once doctors couldn’t figure out what was wrong with him.

“I would spend sometimes six, seven days a week in the hospital, meeting with doctors,” he said.

Doctors have yet to figure out exactly what’s wrong with Snyder, though he has been diagnosed at various times with Hashimoto’s thyroiditis, a condition where the body’s antibodies are attacking his thyroid, among other things.

To Snyder’s knowledge, it appears living abroad in Asia for several years took its toll on his immune system, to the point where his own body seems to be moving against him.

“It’s tough, once your body learns to attack itself,” he said.

He visited many doctors in Taiwan, none of whom could figure out what was wrong with him. Some even told him his issues were a product of mental stress rather than concrete physical symptoms. He was finally diagnosed with Hashimoto’s as well as Sjogren’s syndrome, another autoimmune disorder which affects salivary and tear glands.

Yet the doctors he saw in Taiwan had little experience with autoimmune diseases.

“It was so frustrating,” he said.

Doctors in the U.S. have offered few better answers, as Snyder continues to visit with various specialists to see if anyone can properly diagnose him.

A different way to heal

Yet Snyder is slowly but surely finding more ways to keep himself healthy, and to gain back some of the weight he’s lost during his illnesses.

He prepares his own food, uses only organic meals (anything else irritates his digestive system and makes him sick), and uses herbs and other plants in accordance with traditional Chinese medicine.

In addition, he makes appointments with doctors in the area for routine check-ups, though he’s growing more confident in alternative medicine. 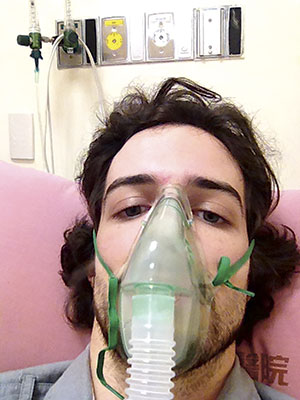 A photo taken of Kyle Snyder during his first time in a Taiwanese hospital. Photo provided

“Traditional Chinese medicine has been the only thing that has helped me thus far,” he said.

Yet his medical visits and his dreams require money, and Snyder can’t work due to his health issues and the worry he could suffer further cardiac attacks, among other things. To that end, he has reopened a GoFundMe online fundraising website which he uses to help offset medical costs.

Though he has lived in Austin for the past two years, Snyder said he had previously stretched about $1,800 collected through GoFundMe as much as possible during his time here, as he has various doctor’s visits to determine how he feels.

Of course, the biggest goal Snyder has is to find out what, exactly, has gone wrong with his body. He would love to find some research group interested in his case, or even just a way to help decrease the pains and issues he has digesting certain foods. Above all, he just wants to get healthy again.

“Getting an autoimmune disease really, really changes your life,” he said.

Women’s Health Care symposium will be May 2

It’s a party just for girls at the Historic Hormel Home in May. It’s the time of year again for... read more