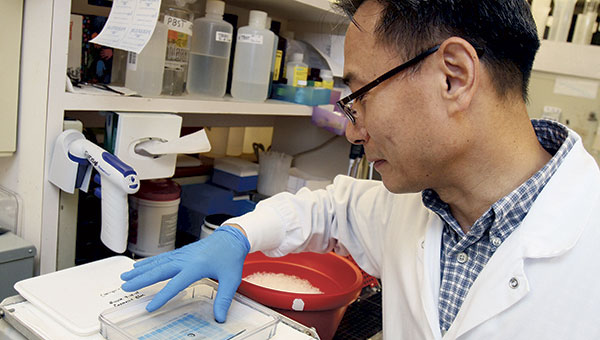 Researcher Young-soo Han works to identify proteins in rat cardiac cells in a lab at Mayo Clinic in Rochester on Sept. 19.

Rochester — In a dark corner of a lab inside Mayo Clinic Hospital St. Mary’s Campus, Niccole Schaible peers through a microscope into the cardiomyoctes, or muscle cells of a rat’s heart. They’re on a glass slide, nearly invisible to the naked eye.

“It’s kind of a cool procedure when you actually see it contracting,” she said. “When you look through the microscope and actually see this thing beating.”

Schaible is a graduate student of biomedical engineering and physiology at Mayo Clinic. She’s using the rat’s muscle cells to understand why heart failure often occurs when patients are warmed after severe hypothermia.

Her research is particularly relevant for Minnesota, which soon will begin its slide from fall into winter. Cold weather brings the threat of frostbite and hypothermia. To help patients with severe hypothermia, scientists at the Mayo Clinic in Rochester are trying to understand why some people survive — even after hours of exposure to extreme cold.

Under the microscope, electrical stimulations make the cell contract every two minutes. Schaible looks at the tiny part within the cell that produces energy, for answers.

“We’re trying to narrow down on what exactly is going wrong in the heart after cooling and rewarming. And we’re focusing on a very specific part of that story, the mitochondrial function,” she said. “So we’re monitoring ‘Are the mitochondria becoming stressed when they’re cooling? Or is it maybe during the rewarming?’ So after we identify maybe the time point, then maybe we can dig deeper into that and ask, like, what exactly is causing it to fail and what can be therapeutic interventions that could remedy that.” 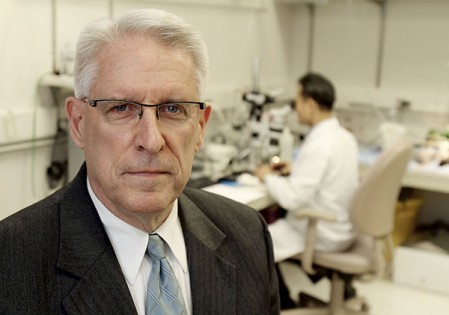 Mayo Clinic’s Dr. Gary Sieck, and his colleagues are researching the effects of hypothermia on heart tissue at the mitochondrial level when it is rewarmed. The research may lead to better treatments for people exposed to extreme cold who may not otherwise survive hypothermia. Alex Kolyer/MPR News

Schaible is part of a team at Mayo Clinic working with the University of Tromso in Norway to find out why many oil rig workers, anglers and others who end up in some of the coldest water on earth — can be slowly and safely revived, even if they have been declared clinically dead.

Hypothermia happens when the body loses heat faster than it produces it. It’s usually the result of exposure to cold-weather conditions or cold water. But hypothermia can happen any time body temperature drops below 95 degrees Farenheit. The normal body temperature is 98.6 degrees.

When the body temperature drops, the heart, nervous system and other organs stop working.

“Chemical heat packs placed in the armpits will not restore a patient’s body temperature back to 98.6 so those circumstances are immediately obvious to the trained responders,” Belau said. “They’re going to do the continuous CPR until the patient is delivered to the hospital.”

That has become the standard treatment for such patients.

Continuing CPR can provide enough circulation to keep tissue alive until a patient gets to a hospital, said Gary Sieck, a hypothermia expert at Mayo Clinic who is a member of the research team. He said doctors and first responders should not give up on a patient or declare them dead until they have been fully rewarmed.

“There are cases where people have been hypothermic for six, seven hours,” said Sieck, a professor of physiology and biomedical engineering. “Where their heart has stopped so they’re clinically dead, but CPR is continued and they’re transported back and then rewarmed in a controlled situation.”

US: Most new immigrant families fail to report