Study: I-90, I-35 make Albert Lea a potential target for sex trafficking

ALBERT LEA — At the crossroads of two major interstates and with the presence of the Internet, Albert Lea could be a potential location for sex trafficking, according to a federal study released Wednesday.

The U.S. Department of Justice’s Office of Justice Programs Diagnostic Center partnered with the Albert Lea Police Department to find out more about the potential for sex trafficking in Albert Lea, to learn how to train officers how to recognize it and to educate the community.

They presented the results of a months-long study on Wednesday at the Marion Ross Performing Arts Center to more than 50 local residents.

Patty Dobbs Hodges, senior diagnostic specialist for the Office of Justice Diagnostic Center, said while she and the others did not identify a specific sex trafficking ring during their research, they did find many indicators that there could be sex trafficking in the area.

She said they studied transportation, Internet and social media, lodging, public health and law enforcement reports, to name a few.

What the study found

Hodges said the Federal Bureau of Investigation ranks Minnesota as the 13th highest state for sex trafficking of minors.

Albert Lea is in an area from the National Human Trafficking Resource Center that receives a heavy volume of calls, including Minneapolis-St. Paul, Mankato and Rochester.

Sex trafficking is facilitated by accessible transportation routes, and with the intersection of Interstate 90 and Interstate 35, Albert Lea sees about 19 million vehicles travel through the city annually, according to an analysis of traffic volume from 2004, the report states.

“The sheer volume of cars, trucks and buses passing through is an indicator we feel should be looked at,” Hodges said.

Studying hotel occupancy rates from 2011 to 2013 shows that Albert Lea has an average annual number of almost 170,000 hotel rooms available and an annual occupancy rate of 50 percent.

The report found that the lodging accommodations for people traveling through the city provide an environment conducive to hosting sex trafficking activities.

“Traffickers move from location to location,” said detective James McBride with the Clearwater, Fla., Police Department, who is also the president of the International Association of Human Trafficking Investigators.

Hodges said the introduction of the Internet has been a “game changer,” where more vulnerable victims can be reached. What used to be a crime found on the streets has turned into one behind closed doors.

In terms of public health, she said Albert Lea has experienced an upward trend in sexually transmitted diseases from 2000 to 2013, which is an indicator of an increase in unprotected sexual activity.

They also looked at law enforcement data because sex trafficking may be connected to other crimes.

Hodges and McBridge applauded the efforts community groups such as the Albert Lea Citizens Against Human Trafficking have made thus far to raise awareness of this issue and encouraged further education in the community.

They also encouraged local leaders to develop relationships with national, state and regional groups already set up to prevent and address human trafficking.

Hodges said while her initial reaction is that there is not a huge volume of cases in Albert Lea, the community needs to be prepared to react to it, if the case arises. That includes building up resources for potential human trafficking victims.

“Is the sky falling in the city of Albert Lea or is it Utopia?” asked J.D. Carlson, Albert Lea Police Department deputy director of police. “It’s somewhere in between.”

The results of the study came almost three weeks after the Albert Lea Police Department conducted what they labeled a “John” sweep in support of sex trafficking prevention. Four men were arrested.

Carlson said police put an advertisement online, and on the first day the ad was posted the department received at least 100 calls. On the second day, there were 200.

The deputy director said he plans to put the presentation online for the public view in the near future. The department and other citizen groups plan to implement many of the recommendations given in the report.

The study was free to the Albert Lea Police Department. 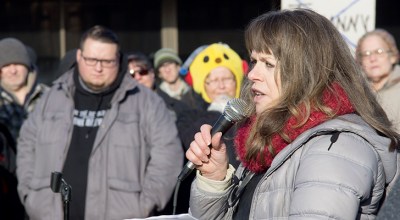