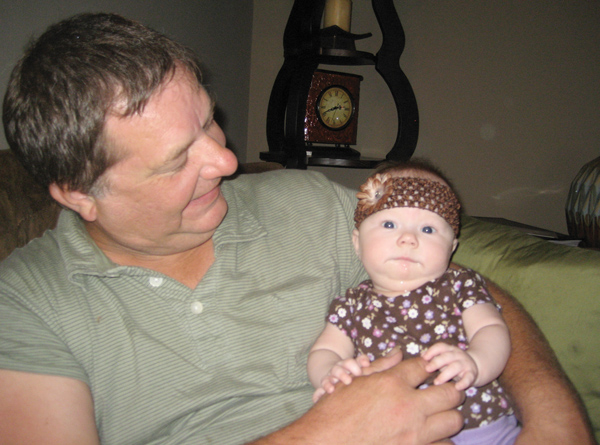 Lyndon Schewe, 53, was trapped in his car for more than six hours after crashing into a ditch just off Interstate 90. - Photo provided

Waking up in his smashed Buick Park Avenue with items from his car strewn around him, 53-year-old Lyndon Schewe could not remember what happened.

But as icy water from Wedge Creek came into the driver’s side of the car, he knew he had to get help.

Schewe, of Owatonna, had crashed on Jan. 5 off of Interstate 90 down a hill and into Wedge Creek.

Schewe said he listened as cars passed on the highway, apparently unable to see his car.

“I could hear them out in the distance,” Schewe said. “At times I would start yelling, especially if I heard a car slow down. At other times I figured I had to save my strength.”

Schewe, a startup service technician for Medford’s Evapco Inc., said he woke up at about 5 a.m. that day, packed some tools and left his house about 30 minutes later to travel to Le Mars, Iowa. 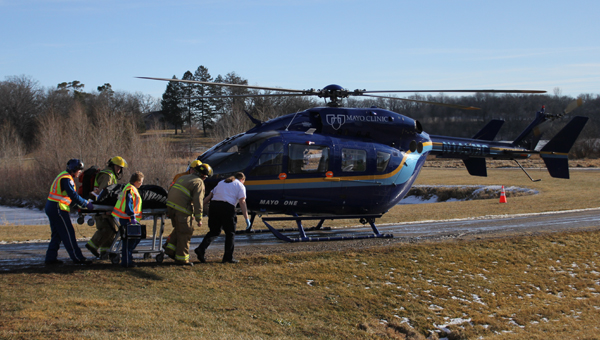 Schewe was airlifted via Mayo One to St. Marys Hospital in Rochester Jan. 5. -- Herald file photo

Schewe services large heating and cooling equipment and was scheduled to work at a plant there.

After taking Interstate 35 to Albert Lea, Schewee cut across to Interstate 90. Schewe said he remembers it was a bit warmer that day, but there were still some slick spots on the highway.

The next thing he knew he hit an icy patch. And that’s the last thing he remembers.

When Schewe woke up — an estimated 15 minutes later — he was in the ditch on the other side of the highway. His car was smashed and in the icy creek. 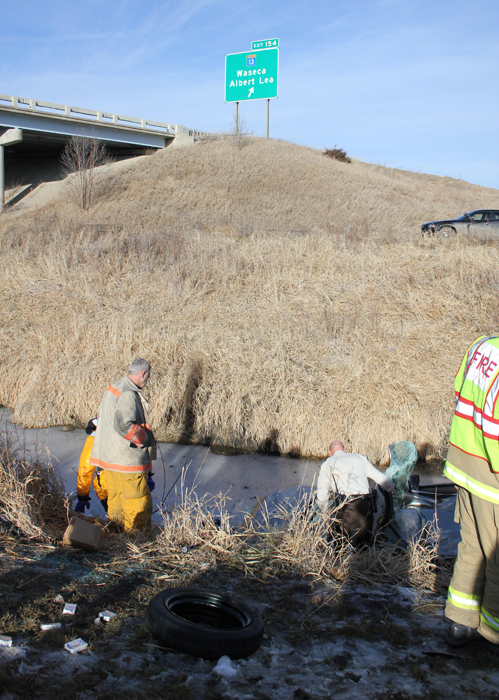 Firefighters search through debris after Schewe was extricated from the his tan Buick Park Avenue after it crashed into a creek below Interstate 90, west of Highway 13 on Jan. 5.

It was still dark outside, and he was injured.

He said he knew approximately where he was at, just west of Minnesota Highway 13 off of I-90.

“I thought in 15 minutes to a half hour I’ll be found,” Schewe said.

He said he tried to find his cell phone, which had been on the seat beside him, but couldn’t. In fact, it is still missing.

Not knowing the extent of his injuries, his thoughts were to try to keep moving.

“I kept on thinking and hoping for the best, thinking about friends and family,” he said. “Basically I never lost hope.”

He “scooted” over from the driver’s seat to the passenger seat to avoid the ice water in the driver’s side of the car and was “jiggling around, saying prayers, singing” — most of all, trying to stay hopeful.

He said he tried to think of other ways he could call for help through things such as his OnStar system — which didn’t work because his battery had flown out of the car — and his GPS system.

At one point, he tried to grab a toolbox with his toes to use walkie-talkies, but that didn’t work either.

“I just tried to keep myself awake,” he said. “I knew if I went to sleep it might have been bad.”

At about 1 p.m., a little more than six hours after Schewe first woke up in the creek, Chris Sorenson, who lives nearby with his parents, drove by on the gravel driveway next to the creek. Sorenson saw debris from the crash and stopped to get a closer look. 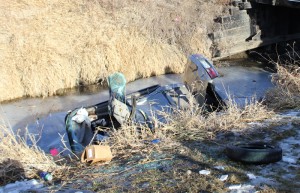 Schewe's tan Buick Park Avenue is left in the creek below Interstate 90.

That’s when he found Schewe.

Schewe said he heard Sorenson call for an ambulance. Then the man called Schewe’s wife, Cindy, to tell her what happened.

Authorities from the Minnesota State Patrol and Freeborn County Sheriff’s Office arrived, and Schewe was airlifted via Mayo One to St. Marys Hospital in Rochester.

“I was a little freaked out,” said his wife, about finding out about the crash.

She said she thought her husband had already been to Iowa and back and was surprised he was done with his day so early. She didn’t yet know he never made it to his destination.

Cindy’s brother picked her up in Owatonna and took her to St. Marys.

On the road to recovery

At St. Marys, she soon learned her husband had numerous injuries: a broken spine, a fractured thumb, a broken arm, a punctured lung and a broken nose. He also cracked six ribs, had a gash on his head and even had a little frostbite.

He was in the intensive care unit when he first arrived, and then the doctors performed back surgery. On Monday, Jan. 9, he had arm and hand surgeries.

Little by little, his condition improved until he was released Jan. 15, just 11 days after being admitted.

Though he’s home, Schewe said he still has a lot of recovering to do.

He’ll have to wear a back brace for the next three months, and he has a cast on one hand and a sling for the other arm. He also will have to go through rehabilitation to get used to moving his arm again.

“I just want to get back to normal life, get back to work and do the stuff I normally do,” he said. “From what they said, I’ll be pretty normal.”

The couple said they have received lots of emails, calls and cards since the crash. They have an optimistic attitude and are grateful things weren’t worse.

“We are very thankful for our caring family and friends,” his wife said. “It is comforting to have such wonderful support.”

So how did Schewe end up in the creek?

Though the Minnesota State Patrol has not released many details about the crash, Schewe said he and his family believe he hit an icy patch, traveled across the median, crossed through the eastbound lanes of the interstate and then went down along the hillside near the bridge that crosses over Wedge Creek.

A history of song

The Northwestern Singers is more than a singing group — for Faye Bollingberg and Rick Young it’s community in a... read more