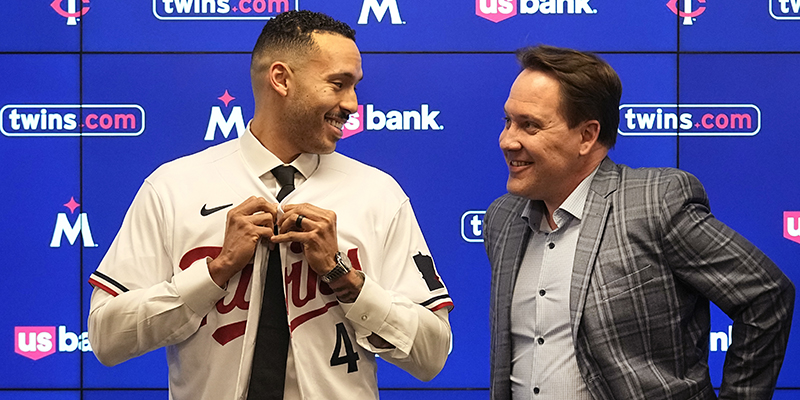 MINNEAPOLIS — The fact that Carlos Correa picked richer offers from two other clubs didn’t create any ill will from the Minnesota Twins — nor deterred them from trying again.

The Twins truly felt they were Correa’s favorite all along, even if they were going to be outbid.

After Correa’s first agreement with the San Francisco Giants, whose deal fell through before a similar scenario unfolded with New York Mets amid concerns about his long-term health, Twins president of baseball operations Derek Falvey shared an emotional phone call with Correa that was supposed to be a farewell.

“The thing that I took away from him was how much of his heart was here,” Falvey said.

One month later, Correa was whole again. He passed his physical exam Wednesday and signed a $200 million, six-year contract to return to the Twins, who re-entered the most convoluted free agent negotiations in baseball history after the false starts with the Giants and Mets.

Correa agreed Tuesday to a contract that could be worth $270 million over 10 seasons if the All-Star shortstop stays healthy, a uniquely structured deal the Twins assembled to jump back in contention after it appeared they’d be outspent — twice — by bigger-market franchises.

“Derek did not let notice go. He was constantly in communication,” agent Scott Boras said.

The agreements with the Giants and Mets dissolved over concerns by those clubs about the long-term viability of his lower right leg. Correa broke a bone near his ankle sliding into third base as a minor leaguer in 2014, and he had a metal plate inserted for extra support in the surgical repair.

Correa agreed Dec. 13 to a $350 million, 13-year contract with the Giants, who scheduled a news conference a week later to announce the deal. That was called off hours before it was set to begin.

Correa agreed that night to a $315 million, 12-year deal with the Mets, and high-spending owner Steve Cohen even publicly confirmed the pending agreement. But the Mets also raised concerns about the ankle after a Dec. 22 physical, and they held off finalizing the contract while attempting to negotiate protections over the next two weeks. Boras maintained last month that Correa’s tibia surgery should not have been an issue.

“Minnesota was always in that small group that I told Scott at the beginning of free agency,” Correa said at a news conference at Target Field. “All that matters is I’m here. I’m going to do it the right way. All that matters is what I do from this point forward. That’s going to be for a long time.”

The Twins had more advanced insight on Correa’s health, having signed him prior to last season in a deal that Correa opted out of to hit the market again after making $35.1 million in 2022. Correa only missed time to an injured finger after being hit by a pitch and a bout with COVID-19. He played in 136 games, batting .291 with 22 homers and 64 RBIs and leading all major league shortstops with an .834 OPS.

The Mets issued a 13-word statement after the Twins announced the surprise signing of Correa for a second straight offseason: “We were unable to reach an agreement. We wish Carlos all the best.”

An option would become guaranteed if in the previous season Correa finishes among the top five in MVP voting or wins a Silver Slugger award or World Series or League Championship Series MVP. He gets a no-trade provision.

Correa won the 2015 AL Rookie of the Year award with Houston, a Gold Glove and Platinum Glove award winner in 2021 and twice made the All-Star team with the Astros, who drafted him first overall in 2012.

The Twins raved about Correa’s leadership during their first season together, and the native of Puerto Rico praised them right back — remarking often about how much he enjoyed the community, the ballpark and the organization. He insisted all along the Twins were in the mix to keep him, even with the bigger spenders pursuing him in a particularly lucrative offseason for shortstops.