‘The future is ours to take’ 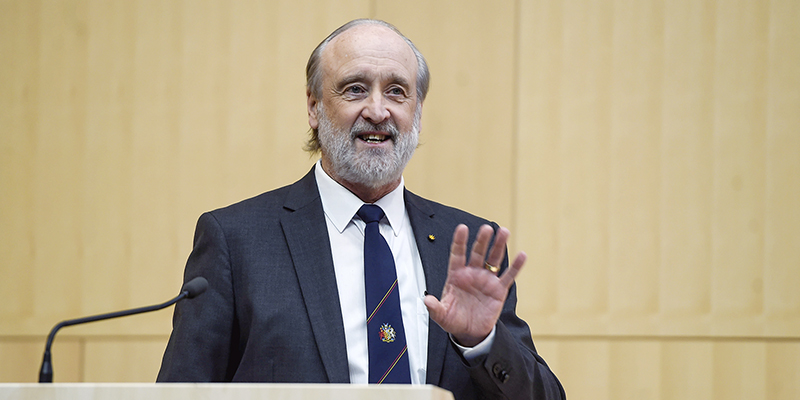 Hormel Institute Executive Director Dr. Robert Clarke talked about funding challenges for science, but also the optimistic view of the Institute in the near and far future during Thursday’s State of the Institute. Eric Johnson/photodesk@austindailyherald.com

The Hormel Institute is ready to shake things up and change the culture of research.

That was what was at the heart of Institute Executive Director Dr. Robert Clarke’s vision during the Institute’s first-ever State of the Institute Thursday afternoon.

Speaking from the Ray Live Learning Center, Clarke touched on the challenges scientific research is facing as well as the long-term vision of the Institute itself that in the end may change a culture where getting all-important grant research funding is so difficult.

“You need to think of this as an 80-year start-up,” Clarke told those in attendance, referring to the eight decades the Institute has been in operation. “We are going to go places you couldn’t imagine today.”

Despite that notion of optimism, Clarke laid out the challenges in front of Institute scientists, which includes the difficulty in getting funding.

Clarke echoed numbers he referred to Tuesday night during the Paint the Town Pink kick-off, again reflecting that only 10% of those seeking dollars from places like the National Institutes of Health, actually see funding, opposed to an unbalanced 90% failure rate.

To help put Institute scientists at the forefront of that funding, Clarke said the HI was taking important steps to take much of the administrative work out of scientist hands and allowing them to focus primarily on the science of their ideas.

“We’re going to take care of that,” Clarke said, explaining that scientists can’t afford to be held up in the pursuit of their research. “Our goal here at the Institute is that our faculty are not put in that situation.”

At the same time, Institute scientists have laid the groundwork for that evolution by producing peer-reviewed work that has been recognized across the board in industry-leading journals.

During fiscal years 2021-23, the Institute was awarded just over $27 million in funding. While good for a smaller institute, Clarke said that more funding needs to be attained.

Clarke said that he envisions a future where the Institute will be part of an improved grant funding structure by putting more of a spotlight on the Institute and enticing more scientists and more opportunities in Austin.

The plan, currently in its early stages, proposes a second powerful microscope to complement the cryo-EM microscope and housed within a two-story addition off the north side of the institute.

Clarke recognized Sen. Amy Klobuchar and Sen. Tina Smith during Thursday’s presentation for their work in securing a $1.5 million grant toward the project.

“It’s a line of technology that supports so many areas of inquiry,” Clarke said. “You want to do this? That’s the place in the United States you want to go. The future is ours to take.”

The Institute has also undertaken work to further get the Institute’s mission out into the public as well as diversify the world of science.

That angle of diversity includes not just ethical and gender diversity, something Clarke poignantly said needed to be improved, but intellectual and age diversity as well.

Again, he pointed to the Institute’s role in laying down this brick work.

“We have to have more intellectual diversity,” Clarke emphasized, explaining that considered recruitment can and should come from all areas. “Eventually we’re going to take over the world.”

This encouraging outlook permeated Clarke’s speech throughout and ended with a future for the institute that Clarke said could happen quicker than most people expect.