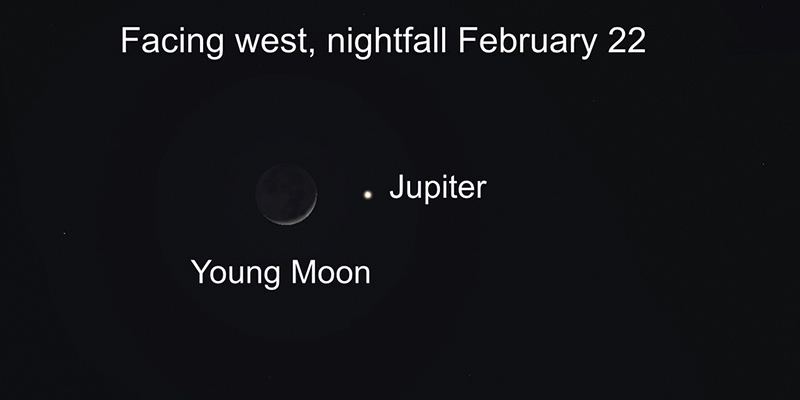 In February Venus climbs above the sunset horizon and settles into its latest reign as an “evening star.” But the sun is also climbing, so we have to go out later each night to see our sister planet against a dark sky.

As Venus surges, Jupiter drops toward it, thanks to Earth leaving the giant planet behind in the orbital race. Look for Jupiter in the southwest and watch the two brightest planets draw closer each night. The pair ends the month poised to pass each other on March 1. 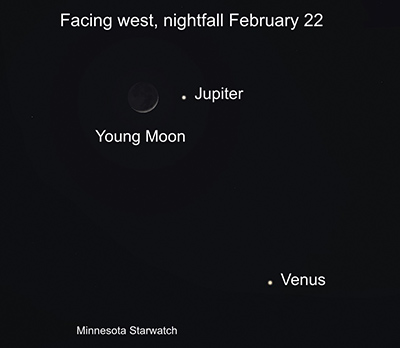 While Earth regularly leaves Jupiter in the dust, it can’t do that to Venus because it’s closer to the sun and speedier than Earth. Thus, Venus climbs and falls due to its own movement. When it’s an evening star it’s chasing us, but when it appears in the morning sky we’re “eating its dust.”

Mars is now high in the south at nightfall. The red planet is fading but still easy to find; look east of the Pleiades star cluster and above Aldebaran, the eye of Taurus, the bull. Also, take this chance to compare Venus, the brightest planet, to Sirius, the brightest star in the night sky. Sirius is the lowest of the bright winter stars now assembled in the southeast and shines to the lower left of Orion’s hourglass figure. Try in mid-month, when Venus will be higher at nightfall and no moon will interfere.

February’s full moon arrives on the 5th. During the moon’s next cycle it visits Jupiter and Venus on the 21st and 22nd and Mars on the 27th.

On Groundhog Day we celebrate an ancient astronomically based Celtic holiday called Imbolc, or lamb’s milk. It marked the start of the lambing season and was one of four cross-quarter days falling midway between a solstice and an equinox. How the groundhog became linked to this day isn’t clear. As for why seeing its shadow, or not, was important, one theory suggests that if the day was cloudy and shadowless, it portended rain and softening farm fields. But a clear and cold day signaled a more stubborn winter.