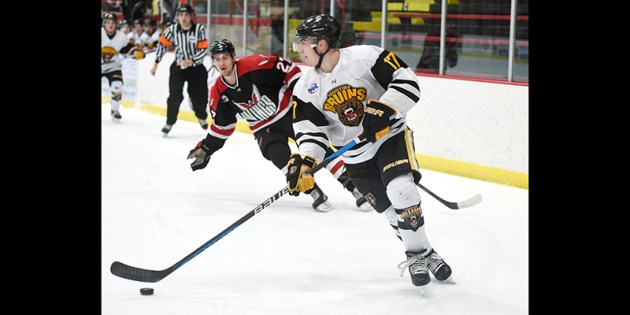 Austin’s Bryan Gillman turns with the puck during the first period against the Aberdeen Wings Friday night at Riverside Arena. Eric Johnson/photodesk@austindailyherald.com 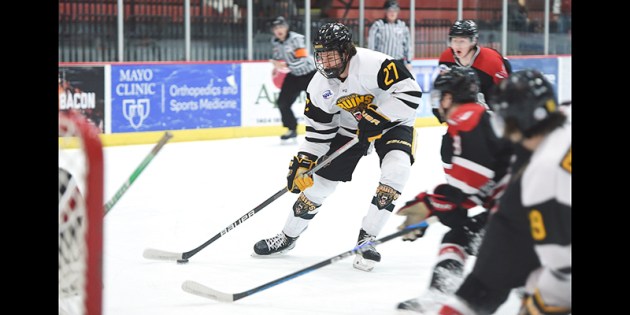 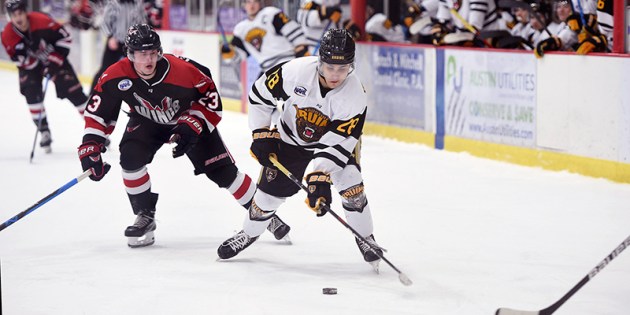 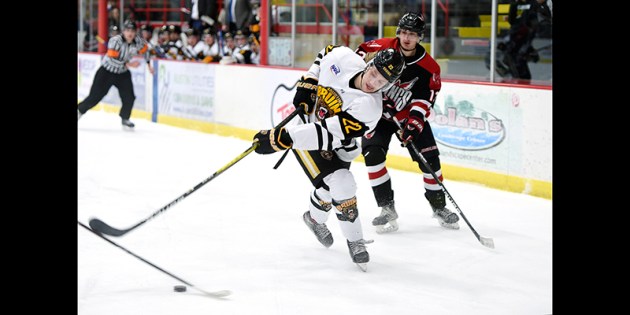 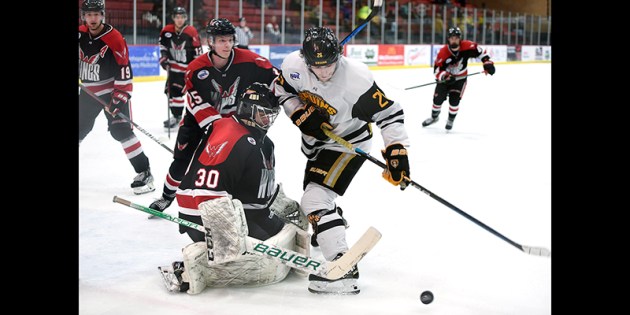 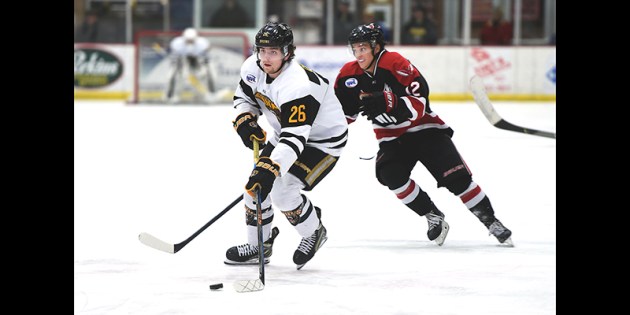 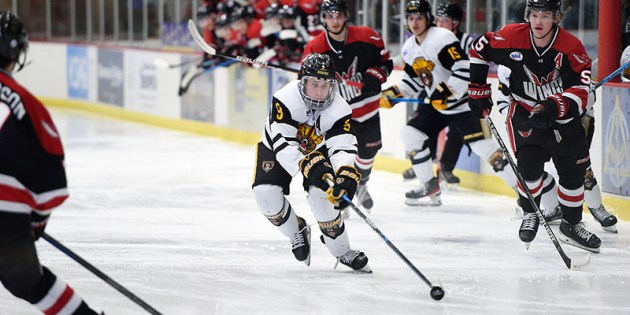 The Austin Bruins endured setback after setback, but they prevailed and pushed their NAHL Central Division lead to 10 points when they outlasted the Aberdeen Wings 4-1 in Riverside Arena Friday night.

After a rough second period that saw Austin head coach Steve Howard ejected after a hard hit to Matys Brassard was not called a penalty, the Bruins were clinging to a one goal deficit when they found themselves shorthanded for a six-minute stretch in the third period after the team was tagged with back-to-back penalties.

Austin (20-5-3-4 overall) not only killed that power play, it bounced back in a big way when Walter Zacher powered in a transition shot into the net to make it 3-1 shortly after the Bruins returned to full strength.

“We definitely faced a lot of adversity, which so far this season we haven’t faced a lot of,” said Zacher, who now has 17 goals on the season. “It’s been a blessing and a curse at the same time. It was nice to see the boys rally on the penalty kill and they gave us momentum to get the job done.”

The Bruins were sailing smooth with a 2-0 lead when they hit some rough waters late in the second period. The Wings pulled to within 2-1 on a goal by Dylan Wegner, Austin’s Brassard was bloodied up on a hit to the boards and Howard was tossed from the game after he littered the ice with sticks to protest the non-call on Brassard, which came with 4.1 seconds left in the second period.

Brassard was able to return to the ice and play in the third period.

“It happened pretty quick and it’s hard to see what happened on the play. I’m really happy with the boys. They’ve got my back,” Brassard said. “I had five or six stitches, but I’m fine now. I was a little stunned for a bit, but I was pretty excited to get back out there in the third.”

Ocean Wallace connected on a power play one-timer from Brassard for Austin’s first goal in the second period and Austin Salani powered another shot to make it 2-0 Austin with 7:29 left in the second.

Trent Wiekmken had 25 saves for Austin as the Bruins shut down seven of the eight power plays from the Wings (17-10-1-2 overall).

Howard had to watch the game from the coach’s room in the third period and he was pleased with what he saw. He is not normally one to show emotion, but he wanted to fire up his team with his second period outburst.

“I couldn’t be more proud of those guys. Something had to be done (in the second),” Howard said. “When you’ve got 16 minutes of penalties to our four, it was time. Hats off to our PK and coach (Justin) Fisher does a hell of a job with that. Trent Wiekum was lights out for us tonight.”