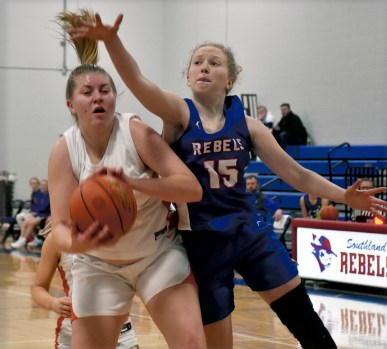 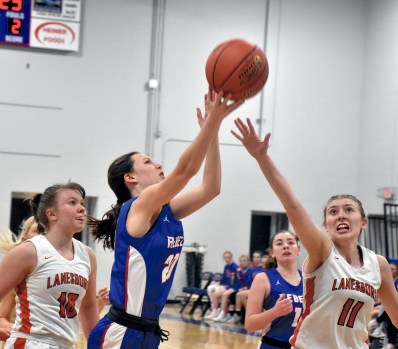 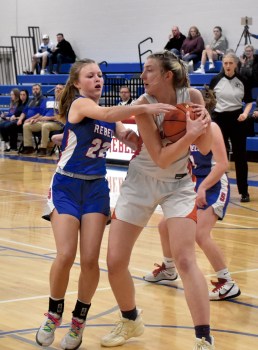 ADAMS – Southland head girls basketball coach Matt Weber has done a lot of teaching this season and the biggest lesson he’s trying to instill is that of consistency.

The Rebels, who have a tremendously young roster are still working on that lesson as they started off slow, but made a late push in  a 54-33 loss to Lanesboro in Adams Monday night.

The Burros (8-3 overall) charged out to a 17-1 lead in the first eight  minutes of the contest and led 36-17 early in the second half. The Rebels rallied back to get within 36-22 after senior Bria Nelsen, who finished with eight points, seven rebounds and two blocks, hit a three and freshman Juliette Matheis, who scored 12 points, hit a fade-away with 14:35 left in the game.

“Our thing all year has been trying to find consistency all game,” Weber said. “Last Thursday we almost played a great game against a great Kenyon team. We’ve had some growing pains, but pretty soon we should start getting over it.”

The Rebels (3-10 overall) have a lot of room to grow as they are replacing their top scorer and rebounder from last year in Bailey Johnson, who graduated last spring. Southland was given a boost on Monday from freshman Breeley Galle, who had six points, four assists and three steals, and junior Katelyn McCabe, who had four points, four rebounds and three steals.

“We had someone last year who could do it all and it’s almost like they got complacent and watched,” Weber said. “They’re learning and we’re getting confidence and building every day. We’re getting a ton of experience and we’re building. That’s the encouraging part.”