Public information meeting set for Jan. 31 to learn about the I-90 Austin bridges project­­ 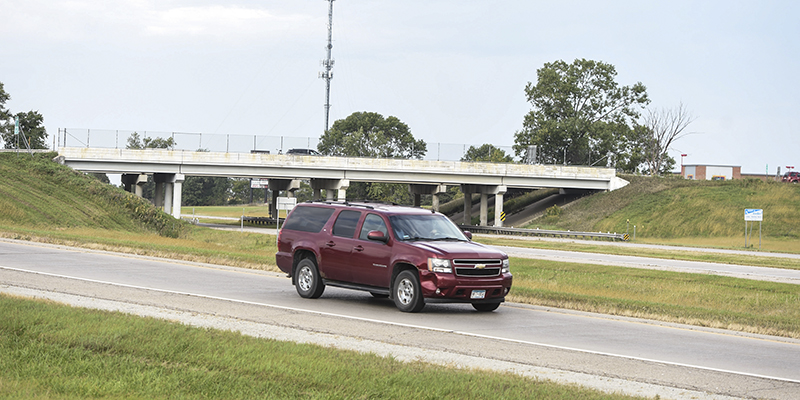 A vehicle drives down the entrance ramp to Interstate 90 last September. The 14th Street Northwest bridge (Highway 218 north) is one of six bridges to be replaced in Austin starting next year. Herald file photo

The public is invited to attend an in-person information meeting on Tuesday, Jan. 31, in Austin to learn more about a construction project to replace and improve Interstate 90 bridges and interchanges in Austin, according to the Minnesota Department of Transportation.

The meeting will be held from 4:30-6:30 p.m. at the Austin Public Library, 323 4th Ave. NE, Austin. The session is drop-in style to better fit individual schedules. People may arrive at any time to learn, ask questions and sign up for updates. 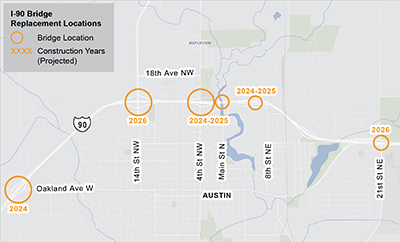 MnDOT is planning to replace or repair bridges at six sites along the I-90 corridor in Austin from 2024 to 2026. The work will include bridges at:

The project is estimated to cost $45-50 million, with the City of Austin contributing $1 million to the project in local spending.

The biggest chunk of that will be a sizable portion of Fourth Street NW from the bridge to 13th Avenue NW, the road between Subway and Kwik Trip, that the city is responsible for funding refurbishment.

In September of last year, Minnesota senators Amy Klobuchar and Tina Smith were in Austin to announce $25 million in Infrastructure for Rebuilding America (INFRA) funding for the project, part of a larger $1.5 billion Bipartisan Infrastructure Law for 26 transportation projects nationwide.

“We are building things in Minnesota and around the country … and we’re seeing the results right here,” Smith said at the time. “Infrastructure is really about investing in people. This is a major artery of commerce as well as making the community work.”