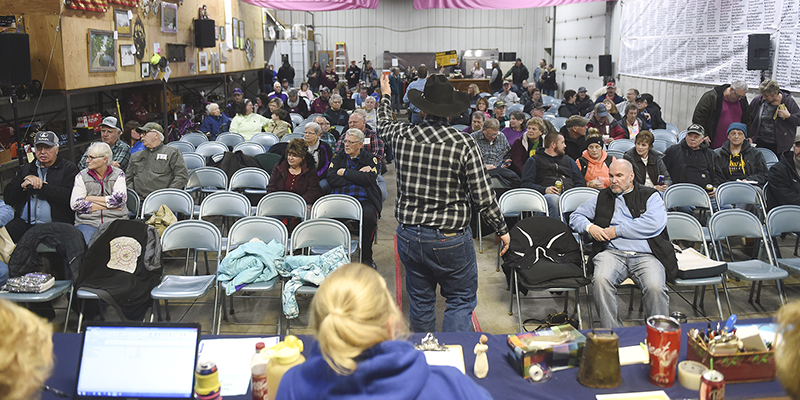 The Lyle Area Cancer Auction got underway Friday night for its 44th year in Lyle. The even continues on into Saturday and the money raised will be donated at the Eagles Cancer Telethon Sunday night. Eric Johnson/photodesk@austindailyherald.com

By now it’s hard to see how people can continue being amazed by what the Lyle Area Cancer Auction does. Each year, it seems to surpass expectations and we marvel at the total that continues to rise.

And yet, each year we are amazed by this example of small town initiative and drive.

This past weekend, the LAC raised $212,000 and reached a running total of $3.5 million, a truly jaw-dropping total for an auction based in a community of just over 500 people.

We heard the familiar stories coming out of the auction; of small items going for big money.  A volleyball that was auctioned three separate times after it was given back for a total of $5,000, a rack of ribs for $4,200, pies ranging from between $300 to $600.

With that in mind, we’re changing our praise up a little bit. We’re still going to recognize the people who put on and organize the event every year, but we have to thank those who contribute the items and do the bidding.

You’re willingness to spend money and donate to this cause is a large part of why it continues to power its way year after year to new heights.

The donations — large and small — shows that people are willing to take large steps to contribute to the ongoing fight to stop cancer.

Congratulations to everybody, from the organizers to those spending on items and food to those organizing smaller events.

This is another all around example of a small town coming together to do big things.

Letter to the Editor: Nine months of inconvenience, or a lifetime of regret?