Off and Running: 2023 Paint the Town Pink campaign kicked off at The Hormel Institute 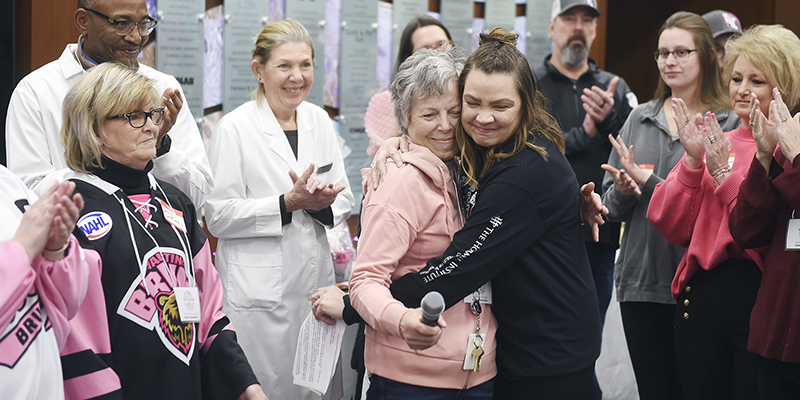 We’re off and running.

Thirteen years after the Austin Bruins painted their first sheet of ice for Paint the Rink Pink, this year’s Paint the Town Pink officially kicked off Tuesday night at The Hormel Institute.

“A long time ago we decided to have a hockey game and raise money for the Institute,” said Bruins co-owner and member of the PTTP steering committee Craig Patrick. “We had absolutely no idea that it would turn into Paint the town Pink. Thank you so much.”

The first year of PTRP raised nearly $30,000 when it was all said and done, however, since then the entire endeavor has raised just about $3 million, with every penny of the funds raised going directly to The Hormel Institute.

“We’re very thankful for what you do for us,” said Executive Director Robert Clarke, just moments after he cut the ribbon Tuesday night. “We simply couldn’t do our research without the money you so kindly give and raise for us.”

Hormel Institute Executive Director Dr. Robert Clarke hugs members of the Blooming Prairie Cancer Group after they donated a check for $50,000 Tuesday night during a kick-off for Paint the Town Pink. Eric Johnson/photodesk@austindailyherald.com

Money raised from PTTP is an important first step for Institute scientists in the form of seed grants that allows them to gather data for their work that hopefully will lead to larger grants from places like the Department of Defense and the National Institutes of Health, both of which are highly competitive.

Clarke said that around 90% of projects fail to generate grants, which makes the seed grants even more meaningful.

“We need the sort of funds you provide for us to get in that 10%,” Clarke told those gathered.

This year’s PTTP wasted no time at all in getting the fundraising started with Cheri Krejci, a member of the Blooming Prairie Cancer Group and former honorary ambassador of PTTP presenting a check for $50,000.

It’s an optimistic start to this year’s campaign, but PTTP wouldn’t be what it is without the people and some of the most important people are those that are chosen as honorary ambassadors each year.

This year’s honorary ambassador is Kathy Wiechmann, who was diagnosed with breast cancer in 2021.

“I feel pretty honored to be asked to be this year’s honorary ambassador,” Wiechmann said.

Wiechmann used her time Tuesday to talk about her own struggle as well as highlight how important it is to have people around you that care.

“Even if you’re not the type of person who likes to announce everything that goes on with you … just giving me words of encouragement meant so much for my mental health,” Wiechmann said.

PTTP’s first big event will be Fishing for a Cure on Jan. 21 from noon to 2 p.m. at East Side Lake.

The annual Paint the Rink Pink game will be at 7 p.m. on Feb. 4 at Riverside Arena.